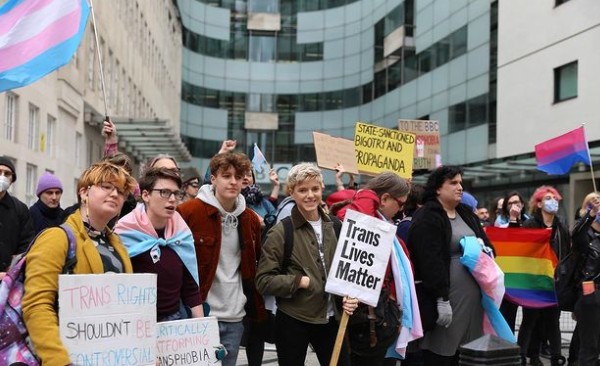 On Saturday November 6, around 100 people gathered outside of the BBC headquarters in London to protest the publishing of an anti-trans article titled: “We’re being pressured into sex by some trans women”, which detailed the experiences of some lesbians who said they are “increasingly being pressured and coerced into accepting trans women as partners”. Despite widespread backlash, the BBC has defended the article and confirmed that it will remain live on its website.

The crowd of protestors included non-binary comedian Mae Martin, who wrote on social media: “[I am unsettled] by the fact that and other UK media continue to uncritically platform misinformed, demonstrably biased and transphobic opinions. It’s bad journalism and it’s contributing to a culture of hysteria that makes life scarier for trans/nonbinary people in this country (and it was already scary).”

The anonymous organiser of the protest told LGBTQ+ news outlet, What The Trans!?, that the article was written “without evidence, to paint a target on the backs of every trans person in the country.” They added: “This is not news, it is targeted hate-propaganda that has no place on any news platform. The UK media has hermetically sealed trans people out of the discussion about trans people, this is the real silencing.”