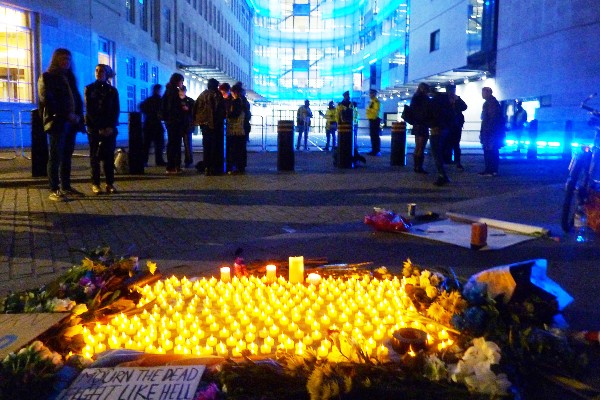 Following widespread criticism of the BBC’s coverage of the trans community, a crowd of 150 people gathered outside the BBC’s London headquarters on the Transgender Day of Remembrance (November 20) to pay tribute to all the trans people who have lost their lives to violence. According to a release from Trans Media Watch, a handful of trans performers, including rapper Princess Armani, attended the vigil to highlight the BBC’s “careless transphobia”.

Vigil organiser, Natacha Kennedy, explained the purpose of the event: “We were there first and foremost to mark the deaths, many otherwise unrecorded, of some 375 trans people across the world in the past 12 months…We were also there to send a clear message to the BBC, that the trans community will not be cowed by their bigotry and hatred towards us.” Kennedy also condemned the BBC for releasing a Portuguese-language version of an infamous anti-trans article in Brazil, which has the highest rates of anti-trans violence in the world.

When discussing BBC director Tim Davie, and head of outgoing news, Fran Unsworth, Kennedy said they are “responsible for an organisational culture which allowed someone to decide that it was OK to translate an inflammatory anti-trans article into Brazilian Portuguese and push it out to Brazil.” She called for both of them to be sacked immediately on account of their ‘journalistic atrocities’.