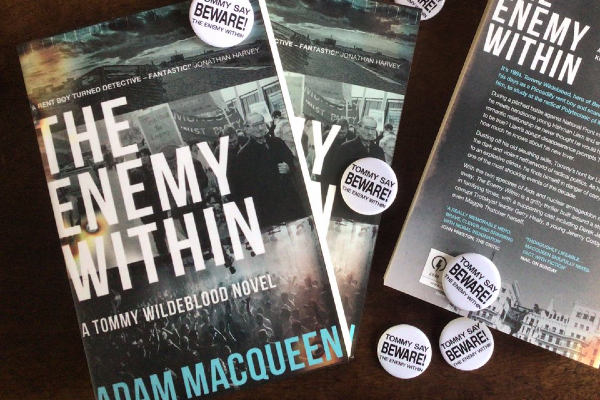 Tommy Wildeblood,  an ex-rent boy who knows too much gets dragged down into the terror plot of the decade threatening the life of the prime minister and the man he loves but struggles to understand or trust.

Adam Macqueen has a real skill in keeping the narrative tension slowly rising as the book progresses, and folds in character and plot lines so that the tension is wound tighter and tighter. He’s also skilful at misleading and confusing, so that not all which is apparent it quite what it seems. This keeps the book lively and the story moving and I enjoy his audacious ability to twist a twist.

Macqueen’s previous Wildeblood novel Beneath the Streets was a thrilling combo of fact and waspish wicked historical fiction You can read Scene’s review of Beneath the Streets here, and this next instalment – as it’s clear we’re gonna get a few more books yet- takes us a few years down the line into the ’80s. Tommy has managed to move on, and seek changes in his life, slipped away from the intense government busting action of the last book and is slowly trying to regain something like a normal life,  but for some lads that just ain’t possible.

Macqueen weaves a believable complicated love story into this head mix. A roll call of 80’s social anxieties and protests forming a backdrop to this tender unfolding as the potential of something more than sex seems to be on offer to our protagonist who’s been bruised so many times, in so many ways, that tenderness seems a trap.  The honest, distrustful but always interesting presence of the narrative voice of Alex allows both insight and understanding of the choices made in this story and we wrestle with difficult moral poses and positions as the ground shifts underneath him and us.

The ’80s are reconstructed with an oddly familiar vibe, uncaring right-wing governments,  strident anti-union actions, passionate socialist voices, people desperate and broke, the feeling of the country unravelling, falling apart and only the rich and privileged doing good out of the daily grind with their uncaring snouts deep in the trough. The book is worryingly timely and exhumes things which should have been left in the ’80s to rot. Still real to us today, social fabric tearing, right wing hysterias, the rise of proto fascists, gay men and new infections running rife and causing fear, politicised police and the overreach of state surveillance, the vilification of the poor, the rise of community action to respond and care for each other.

It’s a dark place that Macqueen conjures up, but utterly believable, you can smell it. If you lived through the ’80s the book is a slap across the face to those of us who believe that life always gets better, and if you wanted some cool insights into the struggles of queer communities during those dark and terrible time then this book serves  it up.  It’s vivid about the threat of nuclear annihilation that seemed so real and the very real daily bombing of the UK mainland by the IRA, things which seem so far away now – how easily we choose to forget…

Macqueen loves to name drop and we meet a roll call of characters in his books which are given delightfully visualised vignettes and side quests; meeting an abusive communist cult leader, narrowly missing being the victim of a notorious killer, to the wilds of Rye and a gilded ethereal Derek Jarmen party combining the ashes of a treasured friend, a swim off that desolate pebbled spit of beach and a wonderful post party shuffle through Jarmen’s proto Prospect Cottage.

There’s a sense of place and time in the book which feels so very real and it’s the skill of this author to take fact and blend it into the narrative pulse of our hero’s story. It’s done respectfully too, and although some of these people are horrors, they are given their own space, the moral ambiguity and perspectives of others examined through Alex’s experience of them and his own curiously forgiving nature.

Aids was another new horror in the ’80s and Macqueen sneaks it into the book as it crept into many gay men’s lives, silently, ruthlessly, horrifyingly swift. Like the recent Channel 4 It’s A Sin we’re shown the panicking  response of health providers, and fear of hospital staff, the appalling transformation of loved ones into skeletal wide-eyed fragile objects, kept in isolation wards and treated with real dread. Familiar to many LGBTQ+ folk of a certain age, but shocking none the less. Alex loses one of his friends,  a much-loved older queer who has kept him safe, literally and figuratively, who loses her battle to the onset of AIDS.  It’s a beautiful part of the book, dignity overcoming abandonment, unconditional love overcoming fear and swift death overcoming hope. I had to put the book down for a while after the chapter.

MacQueen has quite the knack of framing chapter and sentence, knows how to lead us on as readers, understands the possibility of change in turning a page and exploits this ruthlessly. He manipulates the physical structure of the book to bubble up the tensions beneath us as we read. The book is a fun read because of this, and works fundamentally well as a thriller, keeping us in suspense until the last chapter. Leaving some questions open for the next book but also allowing a lot of plot ends to be tied up in a neat and satisfying way.

I’m always annoyed by writers who introduce plans, people or side plots and then don’t resolve them, just leave them ‘what if’ing’ , Macqueen is a very neat Kween, I imagine his house is as spotless as his plots, if he goes around tidying up after himself like here, tucking in all those loose ends.

I’m no fan of thrillers but The Enemy Within is a cracking read, a complex real queer love story, of men struggling to be honest and real enough to grab love when it’s there, an adventure racked with radical threat and emotional trauma, a tender self-realisation story as Alex matures and understands himself and his family more, an on-point political history of a violent time of huge change,  and a stonking good who-dunnit and who-dunn-what.

It opens in Brighton the cold October night of the IRA bombing of the Grand hotel and ends in almost the same place, but in between we get thrown around in a dark and dangerous world where your own moral compass and ability to trust might be the only things which will offer salvation and then at what cost?  MacQueen’s dark sense of gay humour shoots through this book giving wry laughter and macabre snorts of irony. I enjoy the asides of our narrative protagonist, peeling back the crumbling facades of tawdry right wing 80’s politics and society, giving his own take on complex motivations.

This second book of Alex neé Tommy is a masterful adventure of mounting tension leading to an explosive climax but gilded with camp asides; a stolen peek into Mrs Thatcher’s handbag framed with arch precision in a shockingly chaotic scene of disaster, these moments make Alex an engaging and likeable character. We care about what happens to him, so when things do happen to him, and boy do they happen, we are dragged into this rollercoaster queer thriller, delighted at the peril but utterly unsure of where it will all end.

Author Adam Macqueen talks with Scene Magazine reviewer Eric Page, about Beneath the Streets and The Enemy Within on Friday, October 21 @ 7pm

As well as talking to Eric about his books Adam will be reading extracts from The Enemy Within, and answering questions from the floor.

Tickets are free and available here: