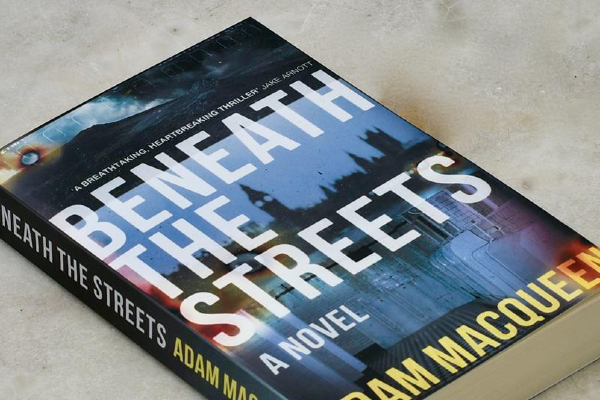 ‘What if Jeremy Thorpe had succeeded in murdering Norman Scott?  MacQueen’s first novel gives us an alternative history based around corrupt 1970’s England and the dark London underbelly of sex for sale and political intrigue. Set in 1976 the naked corpse of a young rent boy is fished out of a pond on Hampstead Heath. Since the police don’t seem to care, twenty-year-old Tommy – himself a former rent boy – finds himself investigating. Dodging murderous Soho hoodlums and the agents of a more sinister power, Tommy follows the trail of guilt higher still. The ruthless Establishment will stop at nothing to cover its tracks.

The narrator ‘Tommy’ is darkly funny, the streets as grubby as you’d imagine, this is London Noir at it’s finest,  and the insights into gay life in this shadowy pre-AIDS world of Queer Soho and the endless opportunities for ‘cottaging’ are wonderfully evocative.  Tommy attends early meetings of the Campaign for Homosexual Equality, and MacQueen dissects the competing factions within the British political left, and different gay groups at the time with a deft understanding of their intersections.  We are given a sympathetic insight into the life of young gay male sex workers of the times, the risks and abuses they suffer along with exploration of the emotional labour it takes to keep working in a hostile environment, and keeping chipper and afloat.  With a cast of real-life characters from the Sex pistols, Prime Minister Harold Wilson to adviser Lady Falkender this is a well-balanced thriller embodied into some very well done ‘alternative history’ which keeps the pages turning until the rather sharp surprising sting in its closing chapter, a comprise – like so much else of the period,  leaving things open enough for a follow on next book.

Macqueen rather helpfully, for those of us too young to remember or not familiar with the in’s and out’s of this political scandal or period, has provided a decent afterwards covering the true events that the book’s deliciously believable plot is spun from.

For more info or to order the book see the publishers website here: