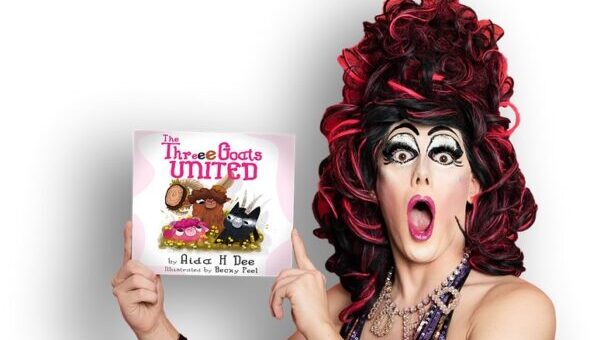 Trans Pride Brighton, Stand Up To Racism and Brighton & Hove Stand Up To Racism have announced a series of solidarity protests to defend Aida H Dee‘s Drag Queen Story Hour on Thursday, August 4: from 10.30am at Jubilee Library, Brighton; from 1pm at Hove Library; and at 3pm at Woodingdean Library. Organisers are asking people to arrive 30 minutes before.

Organisers say: “We are outraged by the attempts of far-right groups to intimidate parents and children who have booked to attend story-telling sessions at local libraries featuring drag queen Aida H Dee by picketing the libraries. Drag Queen Story Hour is an international movement aimed at inspiring creativity and a love for stories in children. It aims to show the world that being different is not a bad thing, by providing imaginative role models for children to look up to.

“Aida H Dee has told the BBC her performances aimed at three-11 year olds have no sexual language and explained Aida is supposed to be a positive LGBT+ role model for children. At a time when a survey by Just Like Us showed that 55% of LGBT+ 11- to 18-year-olds are anxious about their mental health on a daily basis (in comparison to 26% of non-LGBT+ people) we welcome the attempts by local authorities to address this by hosting Drag Queen Story Hour, often as part of local Pride events.

“We condemn the attempts by some on the far-right to foster the pernicious myth that drag is a kind of “child grooming” or in some way sexual, leading to accusations of paedophilia. We remember how the Nazis sent 10-15 thousand men accused of homosexuality to concentration camps. We remember the bombing of the Admiral Duncan gay pub in London by a neo-nazi terrorist.

“The far-right have always tried to associate the LGBT+ community with paedophilia while overlooking some very real scandals in the upper echelons of the Church and government. Their attempts are especially damaging at a time when transgender rights are under attack as part of culture wars, the government has backtracked on its proposal to ban transgender conversion therapy, and cutbacks are denying young people with gender dysphoria the support they need.

“Therefore we encourage all groups and individuals irrespective of race colour or creed to stand firm against the bigots and support local counter-protests against attempts to shut down Drag Queen Story Hour.”

This tour has three events within Brighton & Hove Libraries across one day on Thursday, August 4: Jubilee Library, Brighton at 10.30am; Hove Library at 1pm; Woodingdean Library at 3pm. To get involved, pop in to the libraries or call up with your library card ready.