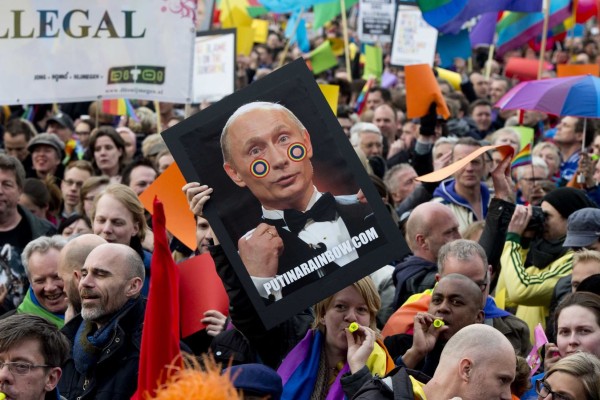 Russian president Vladimir Putin has signed a series of constitutional amendments to intensify the crackdown on LGBTQ+ rights in the country, including a formal ban on same-sex marriage and laws to prevent trans people from adopting children. According to the Associated Press, the amendments emphasised that “a belief in god” and heteronormative notions of family remain core ideals for Russian authorities and citizens.

The amendments, which were approved in 2020 after being backed by 78% of Russian voters, also contained a clause which will allow Putin to stay in power until 2036. The 68-year-old president has been in his role for over 20 years, and has implemented a handful of anti-LGBTQ+ policies during his time as leader, including a ban on LGBTQ+ “propaganda”.

The semi-independent Russian region of Chechnya has seen the greatest hostility towards the LGBTQ+ community in recent years,  with reports of queer people being seized and killed by local authorities surfacing in 2017. Chechen representatives have continuously dismissed the allegations by saying homosexuality doesn’t exist in Chechnya, and that people who are gay can’t be Chechen. Two men were recently brought back to the region by authorities after escaping due to being tortured for alleged homosexuality, with a Russian court ruling that their abduction was legal.