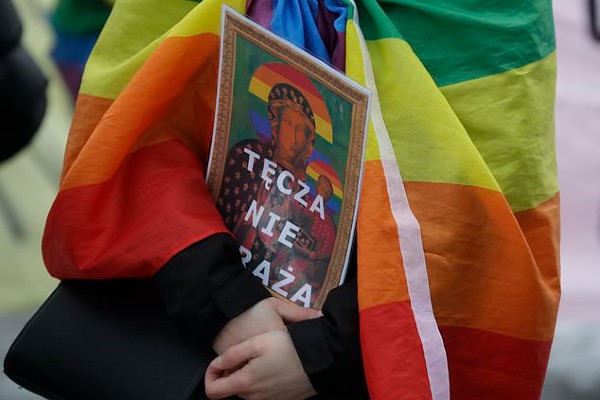 On January 12, three LGBTQ+ activists went on trial in Poland after being arrested for showing an image of the Virgin Mary with a rainbow background during a protest against the country’s anti-LGBTQ+ regime. Elzbieta Podlesna, Anna Prus and Joanna Gzyra-Iskandar joined a peaceful demonstration in 2019 where attendees criticised the Catholic Church’s treatment of LGBTQ+ people. According to the Daily Mail, they are on trial for desecration and offending religious sentiment.

The three do not deny putting the posters of the Virgin Mary with a rainbow halo on walls and around the church, but do not admit putting stickers with the image on garbage bins and toilets. They also deny wrongdoing and continue to advocate for LGBTQ+ rights. Amnesty International has called on Polish prosecutors to drop the charges against the activists, with more than 140,000 people joining an international campaign to free the three women.

Opposition to LGBTQ+ rights has grown rapidly since the 2020 re-election of anti-LGBTQ+ president Andrzej Duda who vowed to crack down on what he refers to as ‘LGBTQ+ ideology’, causing some LGBTQ+ Poles to flee the country in fear. There are now 100 LGBTQ+ free zones in Poland, which have all signed pledges agreeing to ‘oppose acts of tolerance’ towards the queer community.

However, the European Union has added a new clause to its funding rules, meaning Poland could face further financial restrictions if it continues to attack the country’s LGBTQ+ community. This states that EU countries must show respect for the European Charter of Fundamental Rights. Those which refuse to adhere to the principles of gender equality and anti-discrimination could see their projects rejected for EU funding.