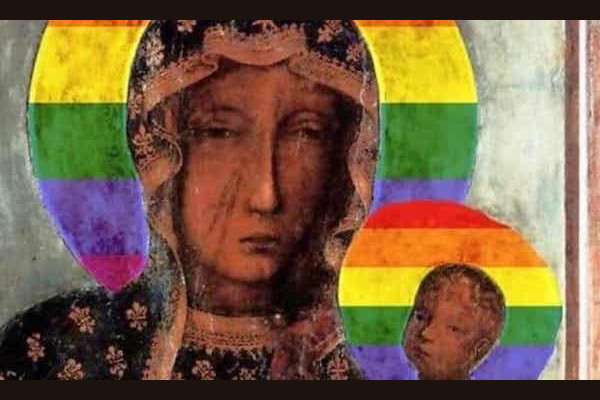 Three women in Poland are facing up to two years in jail after sharing posters depicting the Virgin Mary with a halo in the rainbow colours of the LGBTQ+ Pride Flag.

In a joint statement, Amnesty International, Human Rights Watch, ILGA-Europe, Freemuse, Front Line Defenders and Campaign Against Homophobia have urged the Polish authorities to drop the charges against the three human rights defenders – Elżbieta, Anna and Joanna – ahead of the first hearing in their case, scheduled for Wednesday, November 4 in the town of Plock.

More than 140,000 people have joined an international campaign calling on Poland’s Prosecutor General to drop charges against the three women who are being prosecuted for ‘offending religious beliefs’.

Catrinel Motoc, Amnesty International’s Senior Europe Campaigner, said: “Given the complete lack of evidence of a crime here, it is clear that these three women are being tried for their peaceful activism.

“Having, creating or distributing posters such as the ones depicting the Virgin Mary with a rainbow halo should not be a criminal offence.

“The charges against Elżbieta, Anna and Joanna should be dropped, and the Polish authorities should amend their legislation on the right to freedom of expression to bring it in line with international human rights standards.”