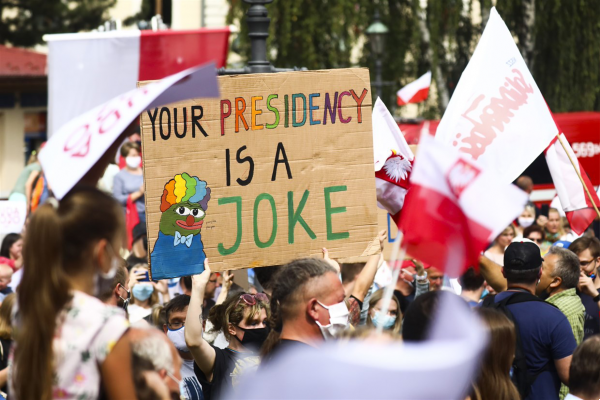 Poland’s anti-LGBTQ+ governmental policies were attacked by the European parliament on Monday 14 September as some called for the country to lose EU funding. The parliamentary meeting discussed a recent report by Juan Fernando Lopez Aguilar (a Spanish lawmaker who heads the Committee on Civil Liberties) on fundamental rights in Poland. Aguilar reportedly stated Poland is digressing from core EU values, and called the situation ‘extremely concerning’.

LGBTQ+ rights have been the topic of discussion in Poland since anti-LGBTQ+ president Andrzej Duda was re-elected this year, giving him another five more years in power. Duda has vowed to crack down on ‘LGBTQ+ ideology’ which he believes is ‘more destructive’ than 20th century communism. Since his re-election, LGBTQ+ activists have been arrested and some queer people have fled the country in fear.

Previously, some ‘LGBTQ+ free’ towns in Poland were denied EU funding in a move to tackle the ongoing situation. Famous figures such as Margaret Attwood and Judith Butler also signed an open letter in solidarity with Poland’s LGBTQ+ community as it has experienced ‘growing homophobic aggression’.

Despite efforts to alleviate the situation, tensions have continued to grow in Poland. Sophia in’t Veld, a Dutch parliament member, said to the EU parliament ‘we see Poland crossing red line after red line’. She called on EU leaders to take firmer action against the Polish government.