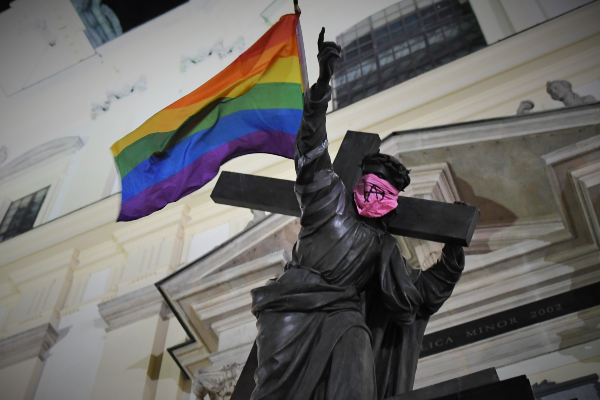 The conflict surrounding LGBTQ+ rights in Poland continues as three activists protesting the anti-LGBTQ+ regime of recently re-elected president Andrzej Duda have been arrested in the country’s capital Warsaw.

The LGBTQ+ activists hung rainbow flags off of statues of Jesus Christ, Copernicus, and the famous Warsaw mermaid, which is what led to their arrest. They also placed pink face masks branding the anarcho-queer symbol on the statues and were charged with desecrating the monuments and offending religious groups.

Mateusz Morawiecki, the Polish prime minister, has criticised the act and said the statues symbolise values that are important to the Polish population. However activists have said their goal was to protest the anti-LGBTQ+ ideology of the country’s governing body.

President Duda has spoken against the LGBTQ+ community on multiple occasions, proposing to ban same-sex marriage in Poland earlier this year. He has also referred to the queer community’s ‘ideology’ as ‘more destructive’ than the communist regime in 20th- century Poland.

As tensions rise in the country, it will now be decided whether the activists who were arrested will be taken to court over the case. Causing religious offence in Poland is punishable by a fine or up to two year’s imprisonment.