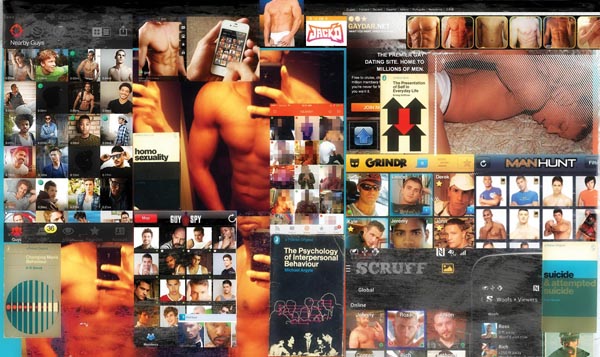 Dates for Mates: or Tweet to Meet by Craig Hanlon-Smith.

Social Media is taking a beating. Almost each week there is a television news report suggesting links between an over-reliance on social interactions through the medium of an app, and the failing mental health of our youth.

This week (at the time of writing) BBC Breakfast profiled SnapChat as the latest offender to our collective social sanity. The allegation that messaging online is now so relentless, young people in particular can neither keep up with or track the volume of incoming messages, but a non-responsive position leads to online bullying, trolling and general abuse.

In short, I messaged you, you didn’t message back – you’re dead to me and I’m going to explain precisely how you shall meet your demise. Nice.

In the grown up (gay) world, another type of social media app is taking the blame for the closure of gay bars and clubs alike. It’s no longer a necessity to trawl the dimly lit jam jar window establishments of yesteryear for friends or f***s through the means of an awkward and initially shy conversation. Dispense with the human aspect, just download the application and pick a penis, easy peasy.

The difficulty with cock choosing based on pressing an image the size of a drawing pin head, is that nine times out of ten, the penis is attached to a real person and people tend to be a little more complex and needy than an easily pleased penis.

The problem with firing an unkind unpleasantry at an online messenger on SnapChat, is that the profile is also attached to a person, and how that shady message is read, processed and understood is now in the lap of the receiver not the sender. Think before you click. In both cases.

There are certainly too many stories of young people taking their own lives following an ostracising experience online. One suicide is one too many and theories abound as to why this may be.

One such explanation is that online messages are read back to ourselves in our own voices. We have all received texts, or emails and railed at the tone of them, when in fact it is certainly ambiguous if not actually impossible to read a tone into an electronic message.

If the delivered missive is devoid of a salutation or pleasantry, it’s too often received as hostile, rude and repeated aloud in the tones of our own irritation when in reality it may simply have been knocked out in haste and without thought.

Despite the obvious cute charm of a toddler, we can all remember how cruel kids can be and I’m not convinced they’re any more horrid now than they ever were. But an overly hysterical ‘I hope you die in your toilet’ screamed across the playground is essentially forgotten by home-time. Or if not entirely, at least home is a safe haven from the bullies.

Young people, just like the grown ups, take their phones everywhere and if they host the insults and threats, they take them to bed at night too. Furthermore, young-uns are still exploring who they are and how they fit into the wider world and are at an acutely vulnerable state of their own development. To therefore read and receive threats of violence and intimidation in their own voices, and at home, can have catastrophic consequences. It’s a battle not yet won and a growing problem.

At the opposite end of the scale is a relentless addiction to ‘gay-hook-up’ apps – also affecting the mental health of members of our community. The need to receive messages of appreciation based on a catalogue of images of our body parts, is for some, taking the place of more meaningful encounters.

An online ‘woof’ or ‘grrrr’ sending the dopamine levels off up into the Ozone layer. A not untypical response to a simple ‘Hi’ a pictorial translation of ‘Hi yourself, here’s my penis’, followed by ‘Blocked – this user has chosen to ignore you’. Cocks and shocks; neither particularly developmental for the low self-esteem.

It is, however, not all doom and gloom. There’s hope out there people. If you could just put the penis selecting apps to one-side for a moment, or whilst shopping for sex try your hand at thinking about the human on the other side of the orifice opportunity.

A number of true friends of mine have emerged on to the little seats in my heart from the murky depths of social media. I resisted Facebook for years but five years ago gave in to the pull of online interactions and loaded up Twitter just to ‘see what all the fuss was about’.

In no time at all I was having regular conversations with a select few. In amongst the one-line quips with the many, lay detailed friendship establishing connections largely around the irritations of commuting, and/or an analysis of the social importance of gin or particular ABBA song lyrics (Eye-Roll).

More recently, through the medium of amusing photo stalking on instagram and shared interests established through Facebook status updates, yes, I caved – it took me ten years but let me tell you, I’ve taken to it like a butcher to a field of squealing piggies.

Whatever the social media forum though, online relationships of any type have a limited shelf life. Even the least cautious amongst us are adept at making exceedingly careful choices about which aspect of ourselves and our selectively structured immaculate lives we are projecting out into the information superhighway.

It’s not that our ‘favourites’ and ‘likes’ are not to be trusted, but true connections are much more about the post-tweet meets, establishing real-time relationships with names, faces and looking deeply into the windows of the soul whilst sharing your nonsense with the beautiful people at the other end of the profiles.

If these friendships are worth the effort; one, you’ll know soon enough and two, they’ll come right back at you with the same energy and enthusiasm you’re devoting to them.

Sure there are still some cock-shoppers on there who’ll drop you a private picture of their penis sooner than say good morning, but I find an eye-rolling emoji or a well placed ‘is that it?’ usually sends them packing their punch-line into somebody else’s joke-book; that’s to say they’ll block you, which is fine by me. Dates for mates? Essential maintenance for the soul. Don’t knock it until you’ve tried it.