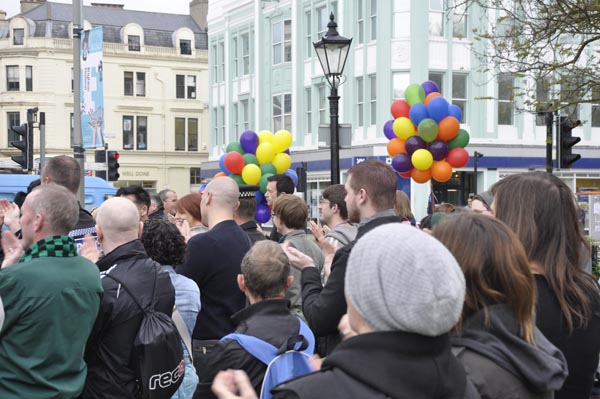 This years IDAHOBIT Day drew a larger crowd than usual to the Old Steine in Brighton on Friday, May 17. IDAHOBIT commemorates the day in 1990 when the World Health Organisation (WHO) removed homosexuality from its list of mental disorders. In 86 countries globally, homosexual acts remain illegal while in many countries lesbians, gay men, bisexuals and those who identify as trans (LGBT) are sometimes murdered simply for their sexuality or gender identity. The theme of this years IDAHOBIT Day was mental health.

It was unfortunate that the event played out to a background of live musicians playing to a handful of alcohol drinkers outside the Spiegeltent also on the Old Stein this year.

The event was organised by the LGBT Community Safety Forum and hosted by its chair, Billie Lewis. Half way through the event everyone present engaged in a minute of noise and there was a balloon launch at the end of the event. The Terrence Higgins Trust outreach service provided hot drinks.

To mark the day Brighton & Hove City Council flew the rainbow flag from it headquarters at Kings House in Hove. Barclays Bank marked the day with posters and rainbow flags in all their Brighton Branches.