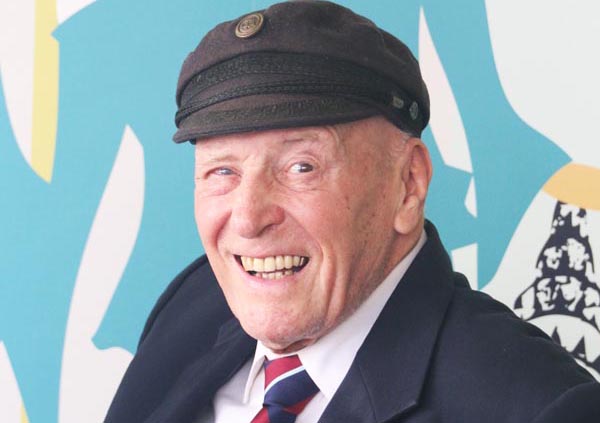 George Montague, who rose to national and international prominence when he took to his mobility scooter and appeared on the Brighton & Hove Pride parade as the ‘Oldest Gay in the Village’, has died.

George was born in 1923, and did not come out till he was 59. He lived his life against the backdrop of the gay rights movement’s campaign for equality.

He lived through bad times in the 1980s, epitomised by the AIDS epidemic and Section 28 and celebrated the good times with the delivery of civil partnerships and finally same-sex marriage in March 2014.

George served King and country during the Second World War, and fathered three children to Vera, who he married and shared with the secret of his sexuality. He remained married to Vera for 22 years and they kept close even after separating. Sadly Vera died in 2000.

George finally came out in 1982. In 1997 he met his partner Somchai who he entered into a civil partnership with in 2006 and finally married on the eve of Brighton & Hove Pride in 2015.

In a statement published on Facebook, the Montague family said: “On behalf of all the family of George Montague I would like to sincerely thank everyone for their very touching messages of love and support. They have been a great comfort to us all at this sad time.

“After a brave fight against dementia for the past 10 years, George passed away peacefully on 18th March with his beloved Somchai Phukkhlai at his side. As well as devoted husband and partner to Somchai for 25 years, George was a much loved dad, grandad, brother and uncle. We will miss him terribly, but we are so proud that he has touched so many lives and that his message of tolerance and acceptance will live on.

“Special thanks also to everyone at the Sussex Beacon for the incredible care they gave to George in his last days and also their great kindness to Somchai. They do a fantastic job.

“Thank you everyone. From the Montague Family.”