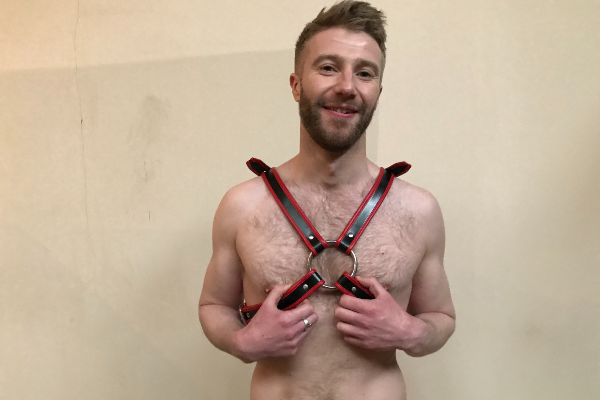 Kane Surry grew up in a liberal Catholic family in Potter’s Bar and attended a Catholic school. “ When I did drama at school, it changed my outlook – I found my voice and I found friendship. I thought this is what I want to do,” he tells me .

His first role was at Primary school in The Giant’s Garden – “ I played Jack Frost . I replaced a boy who got stage fright .” But by the end of secondary  school, Kane was less confident “ I wasn’t sure about things and I wasn’t out – although I knew I was gay at age 7. I had no gay role models and because of my strong Catholic framework I convinced myself that I wasn’t gay. When I applied for drama school I just didn’t put any work into my auditions. I didn’t get in anywhere.”

After a private course and a second year out, he re-auditioned . “ I put all my efforts in getting into Central – I was confident but not arrogant. I was older and more mature . In my first year I came out and went straight into a relationship which was not the healthiest, so I had a lot of stress. “

And in his 3rd  year he had an acute breakdown . He had strong OCD and was terrified of being kicked out of drama school. In his final showcase he played an autistic boy, and he says this concentrated his mind. “ I felt safe in that space.” Plenty of auditions followed  but Kane had gained weight: “ I was not looking like a leading man. I knew it would be a long game.” It was 4 years before work became regular for him.

“I moved to Sitges in Spain and did a British theatre company tour. I didn’t realise how gay it was until I got to Sitges! “ he says laughing. “ I was in an open relationship, I was 27 and I was confident and open. We did plays in schools and community centres across Spain and all in English.”

Coming back to England Kane did a barber’s course – “ It was a fall-back and as soon as I’d finished it, acting jobs came up. In Amsterdam he appeared in a show called Legendary Children of the House of Fierce , a piece about homeless gay black people in New York and later he worked  with writer Patrick Cash on the HIV Monologues, and  the Chemsex Monologues  – precursors of the highly successful streamed series The Grass Is Always Grindr. I became  known by people on the LGBTQ+ Scene – it’s a huge part of my life. I’m so happy to be in the LGBTQ+ theatre community . There are some really beautiful stories to be told.”

In the film series Boys On Film he played in Don’t Tell Jack (previously reviewed by me in Gscene ). “ It was so sensitively written,” he tells me. Of his generation of queer performers he says: “ We’re all at ease with one another- coming out late , I’ve been out and proud and not afraid of it.

“If somebody approaches me with LGBTQ+ work I always want to hear them out. ”  He’s now working on Wild Boars , a a strongly-themed film about three generations of abuse in foster care – he’s one of the survivors in the story .  And in lockdown he notably made the streamed queer comedy drama Distancing (also reviewed in Gscene ) in which he played opposite Elliot Hadley as two boyfriends separated by the  lockdown in two countries and trying to salvage their relationship. It’s funny, moving, sad and very relevant and Im’ hoping there’ll be a sequel which I’m told  is a possibility.

Along with actor friends Alexis Gregory and Denholm Spurr he also appeared in the brilliant streamed series The Grass Is Always Grindr which is both dramatic and educational about Chemsex, HIV, and inter-generational queer friendships, and has had millions of views worldwide.

Kane thinks some of the Zoom experiments of performing in lockdown will stay, even when live theatre comes back. “ People are being really creative in how to make it work. I’m hopeful but I’m struggling to see how some theatre spaces can be profitable. “ He also hopes that future performing opportunities can be more even, more open and more diverse.

Like his contemporaries , if he has anything to do with it, we are in for a new energised young generation of queer performers who want to make their mark in the profession.