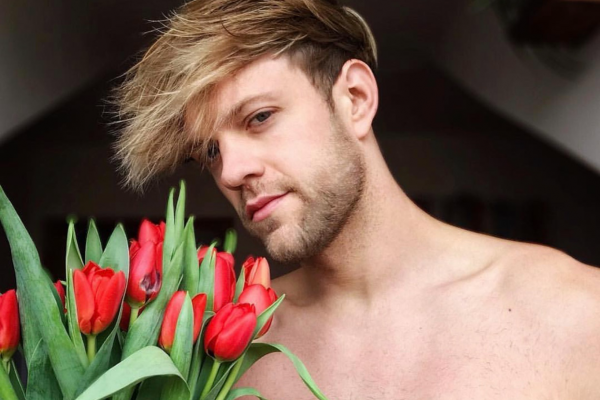 Denholm Spurr is utterly candid about his roller-coaster life experiences and how his work on film and stage has mirrored them.

I first saw Denholm Spurr perform in the cramped upstairs studio theatre at the Old Red Lion in Islington. He was playing a young and frenetically energetic Mercutio in Romeo and Juliet. And he now tells me when we meet in Soho some years later that his performance was more than likely drug-fuelled.

It’s the kind of candid comment Denholm excels in. He’s part of a new generation of actors who are not afraid of their sexuality or their life experiences and often find it populates their work.

Denholm told me: “ Not pretending not to be gay affected my career – I probably lost some work. “

Denholm has been acting for 10 years and has seen the world of equality change.” Iv’e ridden that wave. “ Beginning as  a school performer in a roughish comprehensive, and being involved in local amateur dramatics in Chipstead, Surrey. he went on to read Drama and Spanish at Exeter University. “ Drana school might have been a better route “ he admits. He took part in a summer course at RADA and then spent a year at the Oxford School of Drama, and it’s where and when he came out, and fractured his relationship with his parents.

“But I had been on a trajectory of success’ he says – starting as a young member of the prestigious Olivier theatre awards judging panel.  This was a hard period for him – he describes it as having “ a mental breakdown..I had internalised homophobia after a broken relationship . My bubble of gay existence burst. I couldn’t accept it. After coming out to my parents I because homeless – and had a massive fall from grace. I became a drain on my fiends, started taking drugs. My life became a self-fulfilling prophesy and then I was diagnosed HIV+.”

When he went to support charities, he was told to get an income as a sex worker . “ The weird thing is they were right. I did become a sex worker.  And very few people talk about it – 1 in 4 homeless young people are LGBTQ+. Gay people don’t talk about it, but I feel obliged to.” 6 months of sex work paid off all his debts, saw him housed and saw him physically fit.

Remembering his days in off- West End theatre, he recalls he was paid just 40p an hour. And so he started campaigning, with Equity the actor’s union  for fair wages for the off-mainstream actors. He also got heavily involved in the Offies – the off-West End equivalent of the Oliviers, and was a senior member of the team for 7 years.

And his past experience was reflected and still is, in much of his acting work – particularly with writer Patrick Cash. Art has mirrored his past reality in such pieces as the Chemsex Monologues and the highly successful streaming drama The Grass Is Always Grindr , which has had millions of hits worldwide.

It’s drama but it’s also educational, being supported by 56 Dean Street, the sexual health clinic. It’s been incredibly successful and has clearly reduced HIV infection with its message about safe sex. The series is now also running on Amazon Prime . “ It’s such an important project and no it didn’t make us millionaires !” He laughs. “ But it made me feel like I’d got a career again. “

And Denholm has moved into directing, with a highly successful piece called Happily Ever Poofter, which is Disney meets gay panto ! “ If 10 years ago I’d been asked if I’d do a panto/musical I would’ve laughed. But now I’ve done it and it’s brilliant.”

Denholm is cautiously optimistic about the return of theatre post lockdown but worries about the viability of small spaces .” I fluctuate about the future: a second wave is a great fear, and although the Zoom business has flourished, it isn’t live theatre. “

Safe to say that from the ashes , Denholm will rise again as he’s so dramatically proved he can do.