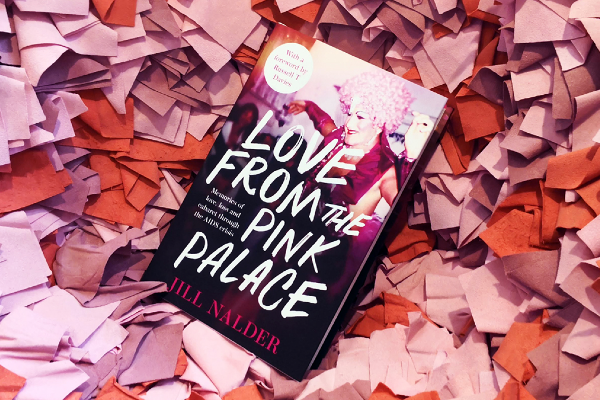 Love From the Pink Palace by Jill Nalder

This is Jill Nalder’s first book and it’s a pretty astonishing debut which grips and holds you tight by the hand, urging you not to go, not to put out the light, not to leave a word unread. There’s something about Jill’s straightforward South Welsh narrating of her life which echos the flint and steel in the soul of this Neath girl.

Industry and passion will get her through and when the darkness envelopes her, she’s a light of compassion, a beacon of hope and a flicking candle in the short nights of many of the brilliant beautiful men she saw die.

Jill’s ability to take stock, to do, to fucking DO what needed to be done, to not let anything stop her, to keep at it, to weep, to be strong is truly inspirational. If you watched the Channel 4 series based around her life, It’s a Sin, you’ll have seen the fictional Jill’s tornado of love hurl itself at the slithering monster of AIDS as it ravaged her community and snatched away so many, so young. (She also played the part of her own mother in the series.)

The Pink Palace of the title was the huge, crumbling very pink London flat Nalder lived in during college, which is brought back to vivid party central life in the TV series.

She lived there with her band of best friends – of which many were young, talented gay men with big dreams of their own – she grabbed London by the horns: partying with drag queens at the Royal Vauxhall Tavern, hosting cabarets at her glamorous flat, flitting across town to any jobs she could get.

There’s a delicious honouring foreword from fellow Wales born – Russell T Davies – who shares his love for Jill and the reasons he based It’s A Sin on her life. The book is full of joy, of wonderful anecdotes and insights into lives long gone, letting them flash into our memories with a golden whirl of camp gay radiance.

It’s knowing what becomes of them, which makes these snatched moments so refulgent. Jill’s stories apotheosize her friends, expose the stigma and shame experienced by people with HIV before the virus had a name.

Sharing the enormous efforts of nurses, doctors, volunteers, lesbians, community reps who worked together to support the gay men falling ill across London, Jill shows how a community formed an effective response in the face of government apathy and negligence.  Campaigning for AIDS awareness and research, channelling anger, and simply being there for people at the end.

Russell T Davies is a good friend of Jill and it’s clear from this book how much of her life he actually used as raw material for It’s A Sin and there’s a lot of memories obviously too naughty for the TV but included with relish in this memoir.

There’s a lovely narrative ebb and flow to the book, a lyrical Welshness to it, which allows us to settle down into the story with some joy before the darkness comes in again, then light again, then night deeper than dread, then a dawn, cold, quiet but with things to do to get us through.

Jill is a busy person, quite how they managed to do so much is a miracle. She is also modest, and although allowing the wonderful excitement of her life to shine here, often through the lens of others’ lives, she also shares the gratitude of being able to experience such talented people.

The book grinds on though, and it’s a hard read at points, the speed and ruthlessness of beautiful men dying is hard to take, if (fictional character from It’s A Sin) Derek’s death made you cry, be prepared to share the grief still felt by Jill for the deaths of so many others.

Love from the Pink Palace is just that, a huge throb of love, from a woman who continues to give and share (although she doesn’t mention it here, her charities have raised more than a million pounds for HIV research and support). Her love teaches us that unconditional love will get us through the darkest of times and give us an opportunity to build on the ashes of the glories of those who went before.

By sharing the lives of her ‘boys’ with us and letting us laugh, while we feel the trembling possibilities they all felt were theirs for the taking, Jill does what she promised them. They’ll not be forgotten.

Most chapters start and finish with a quote of poetry, wrapping the adventures and shocks in each in calm poignant words, reflecting the depth and heft of sorrow that this book carries.

I had to take a long walk along the seafront after finishing the book, it’s quite the ripping yarn, ripping at the heart, emotionally raw. As we saw in It’s A Sin and can truly appreciate through her memoir, Jill has the ability to inspire through action.

As Welsh philosopher Raymond Williams said: ‘To be truly radical is to make hope possible rather than despair convincing.’ Jill is radical. Truly, beautifully radical.

For more info or to but the book see the publishers website here: