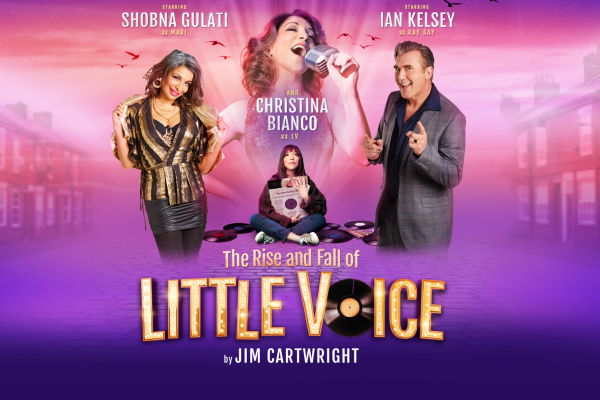 The Rise and Fall of Little Voice

Jim Cartwright’s hit play gives us a charming fairy-tale of an evening, but like most fairy tales tis a play about being Grimm up’north;  a heart of gold surrounded by the social misery of lives unlived, frustrated and forever disappointed, and even with the slightest whiff of happy endings it still leaves me chilled.

The small cast act their hearts out and are supported by two very simple sets; a cut away back-to-back northern terraced house opened to us like a dolly house and a simple but surprisingly effective drop down working man’s club variety act curtain.

Christina Bianco embodies LV, her voices and voice carrying the night up and out of the hum drum night to night existence of its drab characters and into a stella realm of touch perfect clarity and delight, her performance in the second act lifts the whole play up onto another level and one can only hope for it to stay there. Alas we don’t.  Bianco’s YouTube career as an uncanny mimic is perfectly reflected here on stage and her acting holds its own with her convincing portrayal of a withdrawn almost silent girl harmed by her unhappy family life.

Shobna Gulati portrayal of brassy life loving, borderline alcoholic mother Mari Hoff’s to LV’s whisp of a daughter is a tour de force in the swinging roller-coaster of life with a manic alcohol-dependent working-class woman. Gulati doesn’t play for sympathy and her character is a manipulative, angry, desperate person, but we get to see the broken tenderness at her core, the damage wrought by abandonment and although unredeemable Gulati allows the broken dreams of Mari to evoke empathy with us. At points she’s positively Shakespearean in her rage at life’s lot, had the bard harked from Oldham…

Fiona Mulvaney’s Sadie is fun, played with a hint of opportunistic menace and delight but with real charm. With little dialogue Mulvaney’s physical comedy spoke wonders, but I winced at many of the dated & unpleasant jokes aimed at her appearance, Ian Kelsey’s tricky , double dealing Ray Say is greasy and charming and his manipulation and grooming of LV to do his bidding is genuinely creepy.  There’s some light comic relief and emotion connection provided by Akshay Gulati’s Billy and the Phone engineer from James Robert Moore. William Ilkley as northern club owner and stage host Mr Boo is wonderfully fun evoking a perfect working man’s club ambience in the rather camp foofoo surroundings of the rococo Theatre Royal, the audience adored him, all nudge nudge, but no wink wink it was an interesting contrast to the ingrained misogyny in of the rest of the writing.

The setting of the play in the tough socially challenging times of working class 1980’s reflects todays hard times, it’s a savage representation of working class hopes smashed, and lives wrecked by early deaths, unspoken desires and alcoholism.  It feels like two plays have met in a bar, got a bit drunk, and forgot to untangle, when it shines Little Voice is brilliant and Bianco’s voice lifts the play way way up, but then when the miserable grubby grasping family drama restarts again, we lurch onwards into despair and hopelessness, no amount of gurning or great acting can save us from that. It’s a curious combination, like flicking between Xfactor and Corrie endlessly, and it left me feeling slightly disturbed as I wandered into the night.

My companion was delighted by LV’s reinterpretations of the great singers of the past and giggled at lots of the mucky metaphors slung around the dialogue. The audience seemed to adore the performance, with the crude northern sweary types and the simple silent glamour of hearing Bassey, Streisand, Garland and Piaf on stage providing plenty of entertainment.