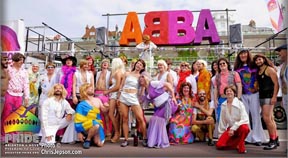 Brighton Gay Men’s Chorus were awarded the Gold Medal for the Best Community Float at the Pride Supporter Awards on Monday night at the Brighton Metropole Hilton. Their float, Homage to ABBA, was judged to have best captured the flavour of this year’s The Worlds a Disco theme. The Pride Community Parade this year was the […]