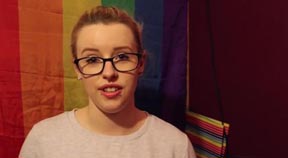 Rebecca Anderson, a 16 year-old lesbian teenager from Edinburgh, was so infuriated by Westboro Baptist Church’s homophobic parody of Panic! At The Disco’s ‘Write Sins Not Tragedies’ that she felt moved to make her own parody of their parody, entitled ‘Your Beliefs Are A Lie What A Tragedy’. Rebecca’s video, can be found on Youtube […]