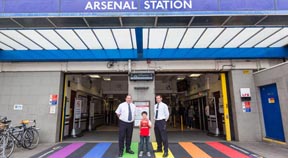 Arsenal Underground station hosted its first-ever rainbow zebra crossing over the weekend as part of Transport for London’s support for Stonewall’s 2014 Rainbow Laces campaign to kick homophobia out of football. The rainbow crossing was created outside the entrance to Arsenal Tube station until Sunday, September 14 and Arsenal and Manchester City fans arriving at the […]