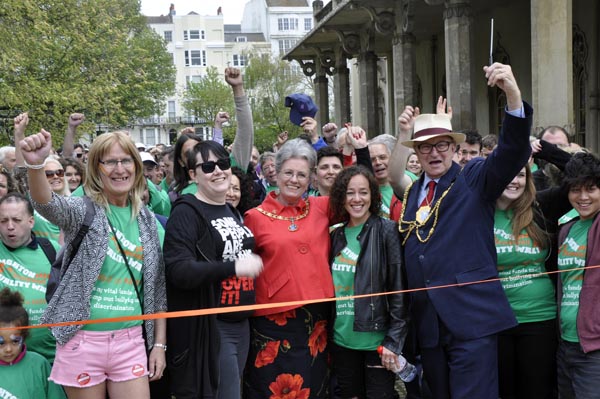 Nearly 700 people took to the streets of Brighton on Sunday, May 8 to raise funds for Stonewall the LGBT equality charity in their annual 10k Stonewall Equality Walk. Musicians from the London Gay Big Band entertained the walkers as they registered in Royal Pavilion Gardens.

Stonewall, the equality charity, working with celebrities, workplaces and schools, is calling on individuals and organisations to tackle abusive language this Anti-Bullying Week by supporting the NoBystanders campaign. National Anti-Bullying Week takes place between November 17 and 21. The campaign has already been backed by celebrities including Stephen Fry, Nicole Scherzinger, Perez Hilton, Sinitta, Clare Balding and David Walliams and comes in response to shocking figures from Stonewall research that reveal more than 75,000 young people will be bullied this year simply for being gay, and 21,000 of these will attempt suicide.