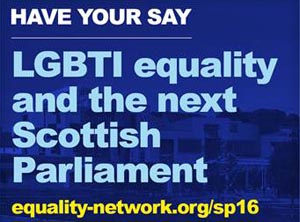 The Equality Network, Scotland’s national lesbian, gay, bisexual, transgender and intersex (LGBTI) equality and human rights charity, launches its Scottish Parliament election LGBTI equality priorities consultation. The survey, which the charity conducts in the run-up to every Scottish Parliament election, asks LGBTI people in Scotland which equality issues they would like to see the political parties address in their election manifestos and what measures they would like to see taken by the next Scottish Government.