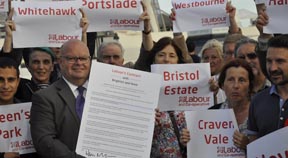 Labour leader Cllr Warren Morgan set out 10 key pledges on which Labour will fight the local elections between now and polling day in May 2015, at an event on Brighton seafront last night (September 25) attended by candidates and Party members. Calling the pledges a “Contract With Brighton and Hove”, Cllr Morgan said a Labour […]