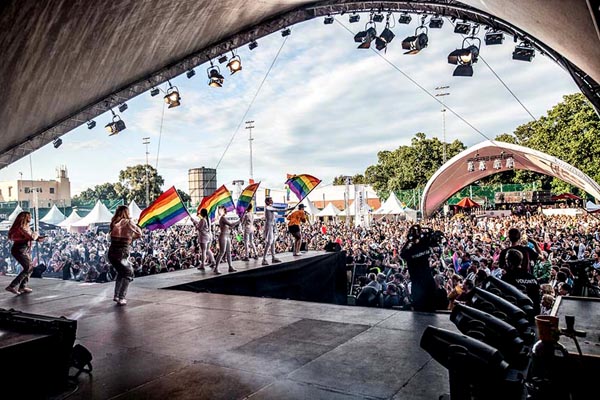 This summer, it’s going to rain men and other hit songs from the legendary Weather Girls at Stockholm Pride, hallelujah!

EVERYONE remembers the monster hit from the mid-80s when two neon-dressed women danced among raining men, ripped with open trench coats.

Today, the legacy of the group is carried on by Dynelle Rhodes, daughter of the original member Izora Armstead. Since Izora passed away in 2004, Dynelle and Dorrey Lin Lyles, who had been active in the group in previous years, keeps alive the memory of the 80s Icons..

Booking this act was a no brainer for Stockholm Pride stage producer Gunn Lundemo, who said: “I played the set before them on the main stage at Vienna Pride in 2018. At once I knew that I wanted to book them in some context in the future, now came the perfect opportunity, their show is amazing!”

The Weather Girls will mix their own songs with the hits of other icons such as, The Supremes, Aretha Fraklin and other divas.

They will be joining Pussy Riot, The Village People, Icona Pop and Melanie C on the main stage during Pride week events.

Stockholm Pride is the largest Pride festival in Scandinavia and takes place in Stockholm city center between July 29 and August 4, 2019.

Tickets cost around 55 euros full price and 40 euros reduced price for the whole week including all concerts, entrance to Pride Park and seminars in the Pride House.