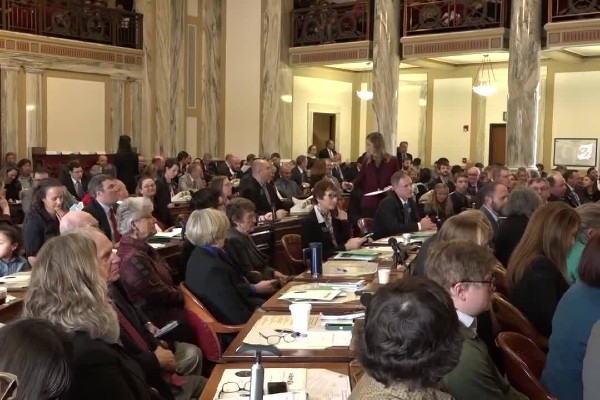 Legislators in Montana, US have rejected a bill which proposed to ban young trans people from accessing gender-affirming healthcare and medical treatment. House Bill 113 was approved by the state’s lower house of representatives, however it failed to clear in the senate, with 49 voting in favour of it and 51 voting against it. A handful of voters who approved the bill in its first hearing ultimately voted in opposition to it.

Sue Vinton, a Republican legislator who previously supported the bill, said she changed her stance after hearing the perspectives of trans people, medical providers and family members concerned about the bill, telling the Montana Free Press: “[Those perspectives heard] were quite passionate, as you can imagine, about the need to allow parents to make these personal decisions for their families. And I learned, also, that it’s a continuum of care. The younger child doesn’t go into an immediate course [to transition]. It’s much more gradual, and it’s a much more involved decision-making process.” State representative Denley Loge also changed his mind before the final hearing, saying medical professionals and the recipient of the treatment (along with their family) should have the final say: “There was just too much stepping in. Plus, there are some family values that need to be considered on the parents’ side.”

Despite the rejection of House Bill 113, House Bill 112 is still under consideration, which could ban trans athletes in public schools from participating in sporting categories which align with their gender identity. US president, Joe Biden, recently signed an executive order prohibiting discrimination against trans students, thus ensuring them access to single-sex spaces and sports facilities, meaning if HB 112 is successful, Montana schools could lose federal funding. Chase Strangio (ACLU’s deputy director for transgender justice) said now Biden is in power, passing anti-trans bills now presents a financial risk to states: “States that attempt to bar trans girls from girls sports, regardless of age of transition, medical intervention or anything else, with a new federal administration, will now be risking lawsuits by the federal government, Justice Department intervention and the loss of federal funding.”