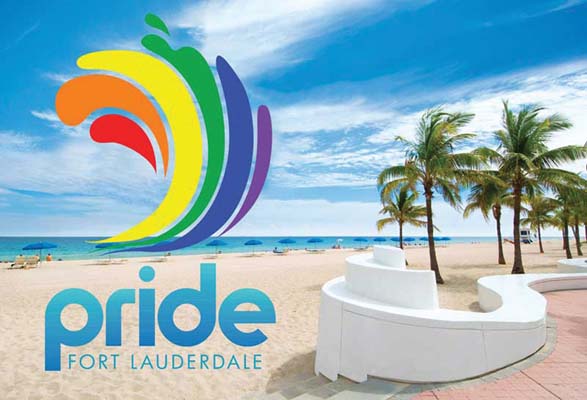 Fort Lauderdale remains the award-winning destination of choice for LGBT+ travellers of all ages. James Ledward finds out why.

AFFECTIONATELY referred to as the Venice of America, Fort Lauderdale is located on a network of scenic inland waterways, flanked to the east by the turquoise waters of the Atlantic ocean. It enjoys an average 3,000 hours of sunshine a year, a balmy 77º average temperature, pleasant ocean breezes, and miles upon miles of the finest sandy beaches in all of the USA.

The most pressing decision facing any LGBT+ visitor is whether to stay on the beach or closer to the nightlife around the Wilton Manors Gay Shopping Mall on Wilton Drive in the City Of Wilton Manors, named as the Second Gayest City in the USA in the 2010 national census.

Whichever decision you come to, Fort Lauderdale is large, spread out, and car rental is advisable. This can be organised at the airport when you arrive. Alternatively download the UBER taxis app (www.uber.com) onto your phone, it’s the most economical and reliable way of getting round the city.

While always a gay-friendly destination of note, Fort Lauderdale has changed dramatically in the last 20 years. In the not too distant past the city annually played host to thousands of US students and tourists for Spring Break. In reality it brought the wet T-shirt and kiss me quick crowd to the city. Then, following changes in the early 1990s to local planning laws, developers moved in, investing multi-millions of dollars in upmarket hotels and resorts on the beach, all featuring restaurants of international standing complete with the mandatory celebrity chefs. This in turn has seen existing businesses raise their game, elevating the city into an entirely more attractive proposition, transforming Fort Lauderdale into the LGBT+ jewel in Florida’s crown with so much to offer the LGBT+ traveller.

Where to stay
The Greater Fort Lauderdale Convention & Visitor Bureau website features over 40 gay and gay-friendly residences in the central Fort Lauderdale area, ranging from intimate men only, clothing optional resorts and gorgeous guesthouses to an impressive selection of corporate resorts located directly on the beach including Marriott, Conrad, Hilton and St Regis. The variety and range of accommodation on offer is impressive with something to suit everyone’s budget requirements.

We stayed at the impressive and recently redesigned Fort Lauderdale Harbor Beach Marriott Resort & Spa, located at the south end of the main promenade and boasting its own private beach. Priced at the upper end of the market, the rooms are luxurious as is its spectacular lagoon swimming pool and public rooms. World class food is prepared by Executive Chef Adrienne Grenier at the 3030 Ocean Restaurant, a chic dinner bistro serving stylish American cuisine and seafood. If you prefer something slightly more relaxed, Riva offers choices from a Marriott burger, to house-made soups, chowders and hearty salads, with a distinct Floridian vibe. Sunday brunch is a highlight of the weekend and can be eaten on the outside patio area while enjoying panoramic views of the beach.

Where to dine in the city
Our favourite place to eat is Rosie’s Bar & Grill (2449 Wilton Drive, Wilton Manors, tel: 954-563-0123) a lush tropical outdoor restaurant serving award-winning burgers, juicy chicken wraps and fresh fish, from a brilliant, quirky menu with first class, sassy service. It’s always busy and lively but even if there’s a line the wait is usually short because of the large numbers of covers available.

Another restaurant to checkout is the Casablanca Café (3049 Alhambra St, tel: 594- 764-3500) which was the first home built on Fort Lauderdale beach, and is its oldest remaining structure. Designed by architect Francis L Abreu, it provides a romantic setting for you to enjoy impeccably prepared flavours of American and Mediterranean specialties.

Where to play
During the day, visitors and locals alike tend to take the sun at Sebastian Street Beach. It is located between Sunrise and Las Olas Boulevard close to all amenities. Best not to get there too late as the sun goes down behind the big seafront hotels quite early, leaving the beach in shade from around 4pm each day.

Home for a quick shower and the party moves over to Wilton Manors where you have the choice of a multitude of gay bars offering great happy hour deals, fine restaurants and speciality shops.

For a complete listing of bars, clubs and saunas, click here:

Where to drink and dance
Here are just three of our favourite bars:

Georgie’s Alibi Monkey Bar (2266 Wilton Dr, Wilton Manors, tel: 954-565-2526) one of the city’s longest established gay bars, located in the Wilton Manors Shopping Mall. Great food served on the patio cafe includes burgers, massive salads and tapas. There is free entertainment most night of the week and a daily 2-4-1 happy hour deal on Monday to Saturday till 9pm. The Jazz Brunch every Sunday till 2pm is well worth checking out.

Ramrod Leather Bar (1508 NE 4th Ave, tel: 954-763-8219) is still going strong and along with Georgie’s was one of the original bars that helped jump-start the development of Wilton Manors as the centre of the gay universe in Fort Lauderdale in the early 90s. It has a great music policy and spectacular light show every Friday and Saturday at midnight. Check out the Pig Dance on the first Saturday of each month featuring world-famous DJs. It’s awesome and very naughty!

Where to Shop
Fort Lauderdale is a shoppers’ paradise and will give your credit card plenty of exercise. Take time out to stroll up and down the elegant Las Olas Boulevard awash with chic boutiques and cafés or visit the enormous Galleria Shopping Mall (2414 E Sunrise Blvd) boasting more than 100 fashion retailers, including Neiman Marcus, Macy’s and Dillard’s, as well as several fine dining establishments, including: Seasons 52, The Capital Grille, Truluck’s, P.F. Chang’s and Blue Martini.

If that’s not enough to satisfy you, take a 20 minute drive out to the second largest tourist attraction in all America, Sawgrass Mills Mall (12801 W Sunrise Blvd, Sunrise, tel: 954-846-2300), where you’ll find one of the largest shopping malls in the country with more than 350 designer outlets, high-end luxury fashion boutiques, speciality shops, restaurants and department stores, including: Bloomingdale’s and Saks Fifth Avenue Off 5th. It has to be seen to be believed; wear comfortable shoes.

Culture
If you feel like venturing out and about you can explore the beauty and wilderness of the Everglades at the traditional Seminole Indian Reservation at Big Cypress. After a short journey west of the city, you can take a swamp buggy or airboat through natural wetlands, at the Billie Swamp Safari where native wildlife includes alligators, ostriches and even Florida panthers have been observed.

For culture vultures, Fort Lauderdale offers plenty. Bonnet House Museum & Gardens (900 N Birch Rd, tel: 954-563-5393), the former home of American artist Frederic Bartlett, was built in 1893. Now a gallery of his and wife Evelyn’s work, the house itself is the main exhibit, having been beautifully preserved amongst several acres of wild gardens and lakes. Wander around or take a golf cart, it’s a fascinating way to spend a morning.

If you want to hear a concert or see a show, check out the Broward Centre For The Performing Arts (201 SW 5th Ave, tel: 954-462-0222), a venue of choice for top touring theatre companies and major recording artists.

Finally, leave some time to visit the stunning NSU Art Museum (1 E Las Olas Blvd, tel: 954-525-5500) which is celebrating its 60th anniversary in 2018. It’s a premier destination for exhibitions and programmes encompassing all facets of civilisation’s visual history.

Dates for your diary
The Stonewall Street Festival & Parade community event will take place in the City of Wilton Manors on Saturday, June 16 starting with a parade at 4pm. The event marks the Stonewall Riots in 1969 when the gay communities in New York City fought back against police harassment and violence.

Fort Lauderdale has something to offer all sections of the LGBT+ communities. The Greater Fort Lauderdale Convention & Visitor Bureau has its own LGBT+ division attracting LGBT+ visitors to the city from all over the world. Vice President Richard Gray has worked especially hard to promote Fort Lauderdale as a safe place for trans people to visit bringing the Southern Comfort Transgender Conference to the city in 2015. This year’s conference will be held on September 6-8.

The World AIDS Museum is the first museum dedicated to the HIV/AIDS pandemic. The Educational Center provides information on treatment and prevention of HIV. The museum was created in 2008 by the Fort Lauderdale based HIV positive support group Pozitive Attitudes who still meet there, every Wednesday evening between 7-9pm.

Museum exhibits illustrate how people rallied together to help each other during the early days of the AIDS pandemic, relating not only the ‘history of AIDS’ but also reflecting the ‘heart of AIDS’. It charts the political struggles of the 1980s, the advances of the new medications in the 1990s through to the reality of the present day as long-term survivors, in video testimonies explain how AIDS is no longer a death sentence.

The World AIDS Museum isn’t a sad place, rather it provides an emotional and uplifting experience. Allow at least one hour to view the signature exhibit The Chronology Of AIDS which charts the progression of the pandemic juxtaposed against key global events.

It skilfully summarises the political winds that were central to the world’s response to the pandemic, while respectfully honouring those affected by the virus. Basketball superstar Magic Johnson dedicated the museum in 2013, 22 years to the day after announcing his HIV status. Speakers in the last year have included author and AIDS activist Larry Kramer and AIDS and LGBT rights activist Cleve Jones. More than a museum, this a MUST SEE for every person visiting Fort Lauderdale. Telephone Museum Director Ed Sparen for a tour on 954-390-0550.

Getting there
We arrived in Fort Lauderdale by cruise ship from Marseille, docking at the marvellous Port Everglades cruise facility which is located just ten minutes from the airport and the city centre. We cleared customs in just 20 minutes, picked up our rental car at the airport and were at our hotel within two hours of disembarking the ship.

You can fly direct into Fort Lauderdale from Gatwick with Norwegian Airlines, avoiding completely the immigration nightmare that is Miami International airport. They have three flights a week (Monday, Wednesday and Friday) from January to September and on Monday, Wednesday and Saturday in November and December. Outward bound prices start at just £159 with inward flights starting from £114.90.

Just last month, Fort Lauderdale was named the best retirement city in the USA for LGBT+ senior citizens by SeniorAdvice, a free resource for senior citizens in the US. The city boasts a vibrant expat community of Brits, including many people from Brighton & Hove who have retired there for the warm climate.

For advice about real estate talk to John Castelli at the top estate agents in the city, CastelliHomes.