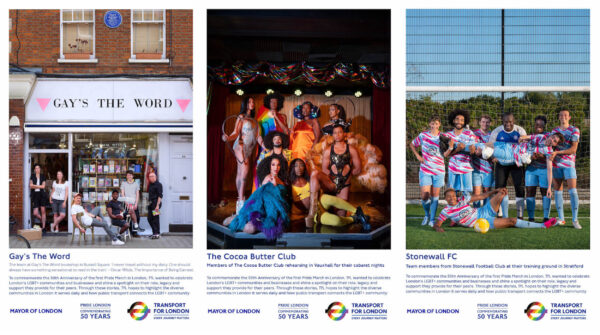 Transport for London (TfL) is celebrating the 50 years of the Pride movement with a collection of LGBTQ+ community and people-focused posters across the public transport network – including on the Elizabeth line for the first time.

Customers will start to see a collection of specially curated and designed Pride-themed photos and posters appearing in London Underground, London Overground, DLR, Elizabeth line and bus stations this week, ahead of the Pride in London celebrations this weekend.

The Pride-themed posters carry stories from a wide range of LGBTQ+ communities and businesses and shine a spotlight on the role, legacy and support they provide for their peers. Through these stories, TfL hopes to highlight the diverse communities in London it serves daily and how public transport connects LGBTQ+ communities.

Polari – a code language used by some members of LGBTQ+ communities to converse discreetly – is featured in a series of posters which will be displayed in TfL stations, including those on the recently opened Elizabeth line.

Additionally, portraits of more than 20 TfL employees and contractors will be on display in Vauxhall and Green Park Underground stations and Poplar DLR station. The posters represent a range of roles in the transport industry – from a customer service assistant to an electrical engineer and a project manager. They tell the stories of staff members being their authentic selves in their roles and are designed to encourage others to do the same.

Marcia Williams, TfL’s Director of Diversity, Inclusion & Talent, said: “TfL is a strong and constant supporter of Pride and LGBTQ+ communities and we’re committed to showing our continuous support all year round. This year, we’re opening a broader platform to experiences, voices and creativity from the community and we hope the wide collection of posters will engage, delight and inspire customers using the network.

“Everyone has the right to travel and feel safe whilst travelling on public transport, and we continue to do all we can to ensure public transport remains a safe and welcoming environment for all. ”