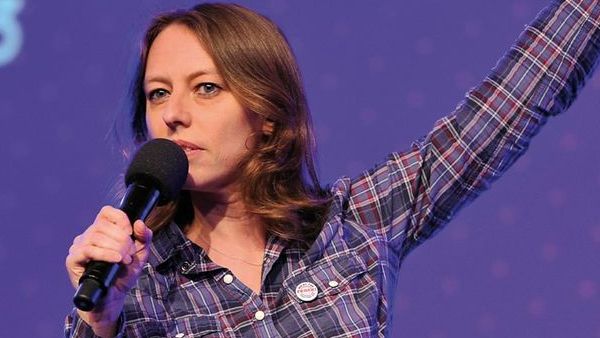 Rosie Wilby is an award-winning comedian, author and podcaster who has appeared many times on BBC Radio 4 programmes, including Woman’s Hour and Four Thought. Her first book Is Monogamy Dead? was longlisted for the Polari First Book Prize and followed a trilogy of solo shows investigating the psychology of love and relationships.

Rosie has been crowned ‘the queen of breakups’ by BBC Radio 4. She’s bringing The Breakup Monologues to Brighton Spiegeltent in May. Comedians Zoe Lyons and Hal Cruttenden plus broadcaster Bibi Lynch will be joining her on stage. They’ll be recording a special edition of her acclaimed podcast (a British Podcast Award nominee in 2020 and recommended by The Observer, Chortle, Metro and Psychologies).

Rosie has been chronicling the intricacies of relationships and breakups for many years. It all began when an ex dumped her by email and Rosie gained a kind of revenge by correcting said ex’s spelling.

She looks at the science behind love and the minefield of online dating. She approaches the topic as a comedian so her takes are always amusing. She considers the strange dilemma of a person who identifies as polyamorous but happens to be single. As well as considering the nature of serial monogamists – does monogamy have any meaning if you’re dealing with multiple cases of monogamy?

We spoke to Rosie about her latest book and upcoming show on the podcast.

The Breakup Monologues is one of our comic highlights of this year’s Brighton Fringe. If her podcast series is anything to go by, the show will be as entertaining as it is informative.

You’ll learn about the new language of dating, from ghosting to lesser known terminology such as breadcrumbing and orbiting. How exactly should you breakup with someone? What happens if they fall off their bike, hit their head and forget they’ve been dumped (something we discussed with Rosie on the podcast!)? Do we need to develop a more nuanced understanding of monogamy? These are some of the questions Rosie will be exploring. She also brings her uniquely queer perspective to these questions.

As Rosie explained when we interviewed her, some straight people experience their first real trauma when they divorce. LGBT+ people are more likely to have been acquainted with trauma from a young age, so maybe we do have a head start when it comes to relationships, and whether we choose to maintain them or end them.

Get the book: The Breakup Monologues: The Unexpected Joy of Heartbreak