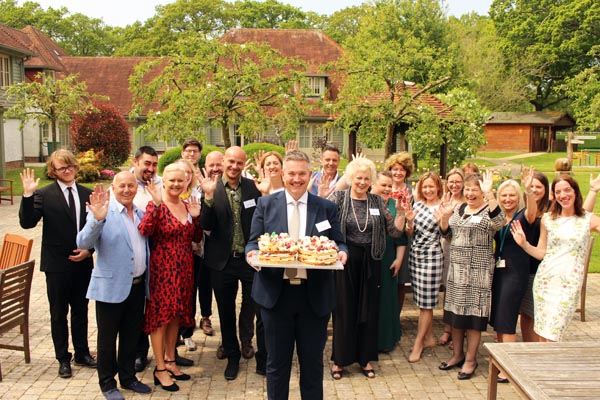 During the following decade, he has supported Chestnut Tree House, both through his company and as an individual, including organising a 10k run in Mallorca, two movie premières (Spectre and Star Wars), hosting a luncheon, taking part in the charity’s China Trek in 2015 and even climbing Mount Kilimanjaro, despite his fear of heights.

David has also taken part in the hospice’s Pay For a Day initiative, sponsoring an incredible seven days of care – it costs £6,850 every day to provide all the charity’s care costs both at the hospice and in families’ homes across Sussex and South East Hampshire.

Since 2012, David has been producing the charity’s annual flagship event, The Snowman Spectacular Fundraising Ball, and has over the years introduced many new contacts and supporters to Chestnut Tree House.

Juliette MacPherson, Fundraising Development Manager, and Sarah Colbourne, Head of Fundraising, presented David with a special photo book to commemorate his support at a small gathering of supporters and staff who have worked closely with him over the years.  They also presented him with a 50th birthday cake to mark his own special celebration in June.

Juliette said: “We would like to say a huge thank you to David for his fantastic support, not only financially, but also for his loyalty and commitment over the last ten years. We truly appreciate everything that he does for Chestnut Tree House.”

The services they offer include assessment, advice and information for children and young adults with life-shortening conditions, specialist short breaks, emergency care, step down from hospital and end of life care.

The Community Team cares for families in their own homes in East Sussex, West Sussex and South East Hampshire while the multi-disciplinary team offers support for the entire family following diagnosis and through the whole disease process.

Chestnut Tree House also offers care for families after the unexpected death of a child or young person, including the use of their ‘Stars’ bereavement suite.

Chestnut Tree House, aims to provide the best quality of life for children and their families, and to offer a total package of practical, social and spiritual support throughout each child’s life, however short it may be.

These combined services cost well over £3.5 million each year to provide. Families are never charged for the care they receive and the hospice receives less than 7% from central government, relying heavily on the generosity, help and support of the local community.