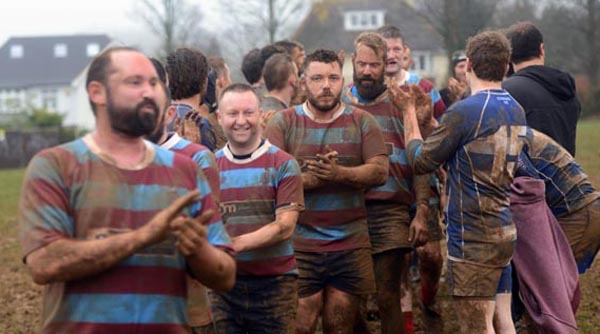 Why Do We Play Rugby?

International level rugby on the TV gives us a sport that is big. Big guys (tall and with muscles on muscles) may be fun to watch but can be pretty intimidating on the pitch. But at an amateur level – it’s very different.

♦  The sport gives you a physical activity which helps fitness, without the constant boredom of jogging or the need to be in a gym

♦ There’s a position for guys of any shape on the pitch. You don’t have to be big, or muscular, or lithe and fast (to start) they wear sizes S to XXL.

♦ They have an amazing social life. Whether it’s Sunday lunch at their sponsors, The Camelford Arms, or pints after a match, they look out for each other as a team. No one is left behind.

The Brighton & Hove Sea Serpents was set up just after the Rugby World Cup in 2015. Although there have been LGBT rugby clubs for some time (20 years in the case of London), Brighton are arriving fashionably late to the party. Their first meeting brought together 50 men and women to discuss whether there was a need for a dedicated LGBT club or to establish whether people just joined Brighton or Hove Rugby Clubs.

They now have over 30 playing members, and held their first full 15 a side match last month against the Kings Cross Steelers at Hove Rugby Club. Support from the LGBT community was very impressive with over 60 supporters turning up to cheer from the sidelines. The Sea Serpents look forward to putting some back through their support of others’ events.

Their next match is an away fixture, against the Birmingham Bulls on April 16.

Their intention is to play league rugby, but while they are learning, their fixtures will be friendlies against either local sides or other inclusive clubs in the UK.

They now officially belong to International Gay Rugby (IGR). It’s not quite like Thunderbirds (though Lady Penelope did go to Roedean) but an association of inclusive rugby clubs from all over the world. Among other ways of supporting member clubs, IGR runs through member clubs regional and worldwide tournaments.

This May the Bingham Cup (www.binghamcup.com) will be held in Nashville, USA and is a worldwide tournament. In 2017 they will be taking a team to the Union Cup which will be held in Madrid.

Organisers know that it can be difficult enough to join any group activity when you’re either new to an area or a sport. Adding sexuality into that mix has often been sufficient to make people give up. That’s why the Sea Serpents exist. They are a primarily (but not exclusively) LGBT club, anyone who wants to be a member, and supports their aims, can join. They currently only have a men’s side, but will, if there is support for it, help form a women’s side in the future.

If you’re interested in playing or supporting, or aren’t really sure but might like a chat with them before committing yourself, drop a line to Chris Rogerson (recruitment) by emailing: info@bhssrfc.com