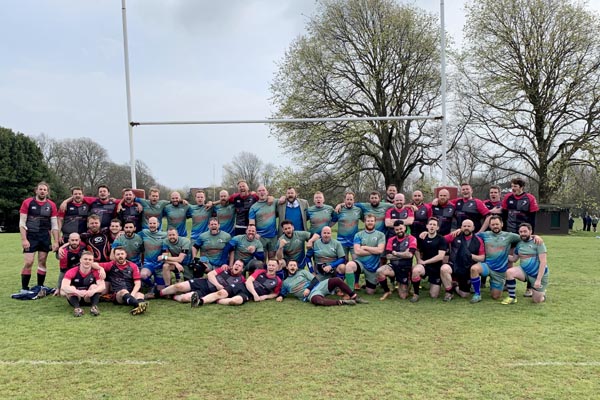 THE end of March 2010 heralded the official end of the Sea Serpents’ third rugby season. In that time we have improved as a club, and as individuals though the journey hasn’t always been a straight line improvement.

Our story began in November 2015, just after the Rugby World Cup had two matches at the Amex Stadium and perhaps a good time to harness the interest of our community.

We met at the Camelford Arms thanks to Alistair and Tony’s invitation and some fifty people came to see what we were about.  We probably didn’t know what a difference that evening was going to make to our lives and, hopefully, to the community of which we are a part.

Thinking about it became all about doing it – a group of the guys who had joined us on that first evening had to make the bigger step to physical activity, on a November morning, in Queens Park. There’s no hiding in such a public space!  We were helped at this point in our evolution by our friends at the Kings Cross Steelers RFC in London, who gave us coaching help.

By the start of 2016 we were ready for two things: a transfer from the park to Hove Rugby Club who again helped us at the start with facilities and coaching, and the change from a bunch of friends (both new and old) who trained together to being a formally constituted Club.

February came and our first match! This was against the Steelers 4th XV, and was a 0-25 loss.  Not only was it our first match but our first real experience of contact rugby and mud. It was a really grotty day, with mud underfoot and cold rain. Despite this we came back for more, and there were more of us.  We trained through the rest of the season, and through the summer. By September we were ready to start fully as a Rugby Club, with a season of matches planned.  We were also able to play in our own kit, courtesy of sponsorship from the Camelford Arms.

That first full season was composed of friendly matches, against sides from Sussex, and from other gay and inclusive sides in England. This season included our first win, against the Reading Renegades RFC.  The games against Sussex clubs particularly helped our standard to improve and we ended the season with a tournament in Madrid with wins against three European sides.

The 2017-18 season had us joining Sussex RFU, entering the league and welcoming a new kit sponsor, Bar Broadway.  This was a hard season for us, and we were only just able at the end of the season to win against a Sussex side, East Grinstead by 33-31 in the last match if the season.

After this match, and two friendlies we won, we went to Amsterdam for our first Bingham Cup, the gay and inclusive worldwide tournament named after Mark Bingham, a member of the San Francisco Fog and a part of the impetus behind the formation of the Gotham Knights who was killed on flight United 93 on 9/11.  There we won 4 out of 6 matches winning the Challenger Bowl, our first silverware.

This brings us to 2018-19, the season just ended. Our division changed from east Sussex to west Sussex, giving us a new series of competitors, but at the same level of competition.  We have fared much better than our first hopes this season, winning 7 league matches and 3 friendlies. Before the season ends we have four more friendly matches against Sussex clubs, gay and inclusive clubs and two touring sides from the west country.  These games will help us hone our tactics for matches in June in Dublin where we play in the bi-annual Union Cup.

We are evolving as a Club, reminding ourselves that we are there for a purpose beyond just enjoying ourselves, though that is a major part of sport and of comradeship.

We are looking to expand to properly fulfil our mission statement which is to bring rugby to the LGBT+ communities were needed and to bring the LGBT+ Communities to rugby. We are improving and growing more than other clubs in Sussex and at County meetings they are interested to hear what we are doing different to them.

One new thing will be to offer touch rugby over the summer. This is mixed and non-contact so anyone can join in whether male,  female or non binary, and LGBT or straight.

On Friday, May 10 between 7 and 9pm we will be having a Meet the Sea Serpents evening at Amsterdam Bar and Kitchen so anyone interested in either full contact rugby (but using touch for fitness) or touch in its own right for the summer (or if it’s popular throughout the year), come along, meet some of the members and have a chat about what it is we do.

Find out more by messaging our Facebook page or emailing info@bhssrfc.com

We are the 2018 Bingham Cup Challenger Bowl champions, and have been voted Brighton’s Favourite Sports Group at the Golden Handbags for the past 2 years.

We are proud to be sponsored by Bar Broadway, and to be members of the Sussex RFU, the RFU and IGR – the body that encourages inclusive rugby around the world.