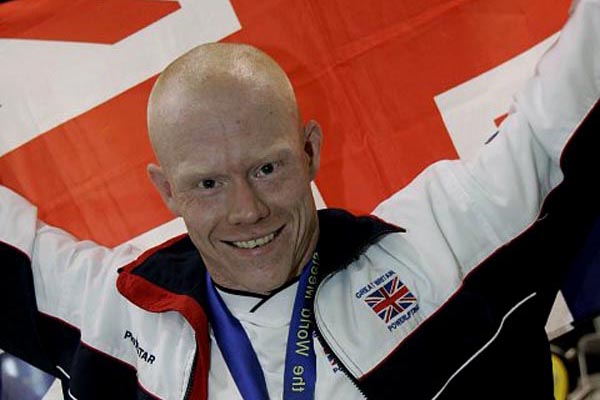 Gay Games Ambassador Chris Morgan has taken his 9th World Championship Gold Medal and once again has become a World Champion in the sport of Powerlifting.

Chris was lifting in his first World Championship after recovering from major knee surgery back in April 2016 and took first place in the Masters Category, Unequipped Deadlift (90 kilo bodyweight class), at the competition held in Trutnov, Czech Republic.

This is the first time Chris has competed the Unequipped (Raw) version of powerlifting in his career, as all his previous British and World titles have been in the Equipped version of the sport, using supportive equipment.

The GPC World Championships are over a week-long and attract some of the very best lifters from all over the world. There were in total of 624 lifters, 840 entries from 32 nations, making it one the largest and truly global annual Powerlifting events.

Chris said: “I’m absolutely delighted to be back in the Great Britain team and feel honoured to be representing my country at these World Championships. Bringing home a gold medal is a bonus and a complete surprise, because this year has been extremely difficult overcoming serious injury and illness. My aim now is to improve my fitness and strength in preparation for next year’s internationals and hopefully continue to add to my collection of medals and titles”.

He continued: “My time away from competition has been used productively with the introduction of the LGBT International Championships and once again I’ll be the meet director for this competition in July 2018. Last year’s inaugural event was a great success with athletes and coaches in attendance from nine different nations. The aim of LGBT IPC is to return Powerlifting to the Gay Games once again in 2022, after it was not included in the Gay Games that are happening in Paris in 2018″.

Speaking about next year’s Gay Games in Paris, he said: “I’m still very much looking forward to being in Paris for Gay Games next year and will be supporting both Paris 2018 and the Federation of Gay Games with their “Out Reach” scholarships programme in my role as an Ambassador. The opening ceremony takes place at the Jean Bouin Stadium on Saturday 4th August and the games finish on Sunday, August 12, with a  total of 15,000 athletes expected to participate from 70 nations in 36 sports.”

Chris has been one of the UK’s leading openly gay athletes since starting his Powerlifting career at the Amsterdam Gay Games in 1998.

Chris supports the Gay Games, who gave him confidence to be an openly gay athlete, as a global ambassador. His role for the Federation of Gay Games is to inspire and motivate young gay athletes worldwide and raise awareness of the Gay Games Scholarship Fund.

He is also the Male Co-President of the LGBT Powerlifting Union, a Global Union of athletes focused on returning Powerlifting to the Gay Games in 2022 and will be the Meet Director of the LGBT International Powerlifting Championships that are happening in London from July 27 to 29, July 2018

For more information about the Global Powerlifting Committee, click here: