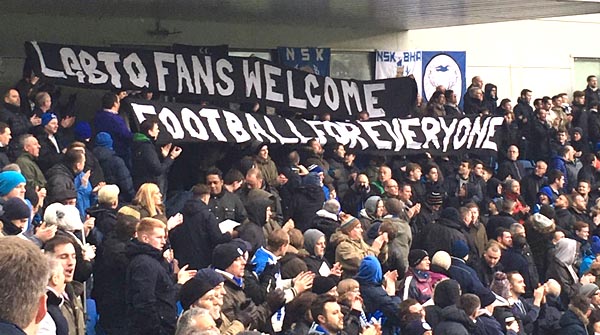 To celebrate LGBT history month, two ten meter long banners were unfurled by football fans in the stands at the Amex Community Stadium as the Albion and Bolton teams came onto the pitch at the beginning of their Football League Championship game on February 13.

The banners welcomed all LGBTQ fans to Brighton and Hove Albion games and the Amex Stadium.

The fan group North Stand Kollective who were behind the huge banners are well-known for using the Amex stands to promote a message of inclusivity. They are at the forefront of challenging homophobia and racism in the stands and in football fandom. They attend games at other stadiums displaying their banners challenging prejudice and bigotry, presenting a positive, inclusive football environment that is safe and welcoming to all fans.

A spokesperson for the group, said: “This is also about Football verses Homophobia Month of Action running during February,  a European campaign and we, the fan group wanted to play a visible part in that month and to make a good strong positive message as part of the campaign, as a lot of terms used can be negative around anti-homophonic language and behaviour, we wanted to turn it into a positive thing, thus the welcoming banner.”

For more information about the North Stand Kollective, click here: