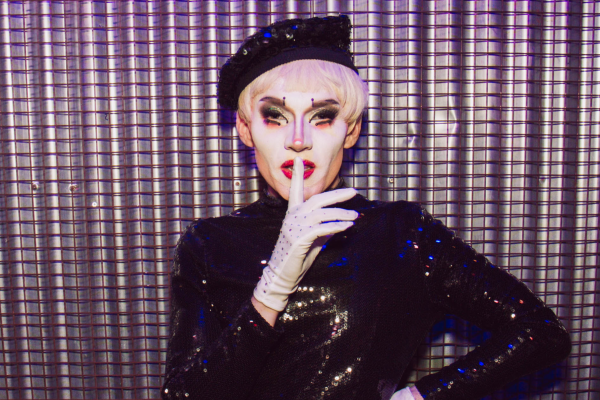 Alfie Ordinary has been taking the UK drag and cabaret scene by storm with his unique take on drag as the UK’s only Drag Prince. Here, he catches up with Graham Robson to share his top tips to keep well during lockdown, performing from his living room and plans for the future…

Hey Alfie, what have you been up to?

I’ve been on Facebook Live every Saturday at around 3pm (I’ve still managed to be late even though the show is only in my own house).

How’s it been going down?

I’ve been trying to bring the fun and madness of the Bottomless Brunch I host at the North Laine Brewhouse every week to people’s homes. We drink prosecco, dance to the macarena, play games and sing songs. It’s been really lovely to connect with old friends and new ones too! The response has been amazing with people joining in.  I ask everyone watching to send me pictures of what they’re doing which is lovely to see afterwards. We had two lovely men from America drinking prosecco and doing the macarena in week two, which was fun to see.

How does it compare with your usual way of performing?

I’ll be honest, it’s weird. So much of drag relies on the audience interaction, so it’s hard to end a song with no applause or tell a joke with no laughter, although we’ve all had those gigs at some point. I guess it’s about making the best of a bad situation.

I’ve been working hard putting together new material with songs I would never do at my normal shows, because some of the material I already have won’t translate without an audience. I’ve also put up a makeshift backdrop in my bedroom using foil curtains that is now a permanent fixture. If I’m honest it’s giving me something to do while being stuck at home. Now that EastEnders is down to two episodes a week it’s hard to tell the days apart sometimes.

Does performing to a camera come naturally to you?

It’s very strange performing to a little phone. It’s kind of good to be able to see what you’re doing. I duct tape mine to the wall so the audience can see almost full length which means I can move around and dance if I want. I think the thing I miss the most is having a microphone. I’ve seen queens using all sorts as a pretend microphone.

What is your exercise routine?

The YMCA gets me nice and warm. If I’m feeling energised I might tackle the Cha Cha Slide.

Any tips to keep us stop us from climbing the walls?

Leftover nail varnish is great for a bit of upcycling. Or if you’re the artsy type, you can download my colouring book for free online from my website

Well I had some really fun shows planned over the summer. My show The EastEnders Cabaret which was at the Queens Arms as part of Brighton Fringe had sold out and we were about to announce its London debut so we’ll have to see what happens with that. I also had a drag roast planned for my birthday in May with Cilly Black, Cherry Liquor, Joe Black and Lydia L’Scabies coming to roast me. Hopefully we can find a time to reschedule those shows. It really does depend what happens and when things can start to go back to normal.  I can’t wait to get back to Bottomless Brunch and I really hope we’ll be ready for Christmas as it’s my favourite time to do shows!

I miss a pint of lager watching the queens in my favourite Brighton venues.

Any words of wisdom to keep us going?

It sounds silly, but watching live streams have been such a lovely way of keeping in contact with people. Seeing all the usual faces popping up in the comments makes you feel like you’re sitting in the Queens Arms or Regency Tavern watching a show and chatting with friends at the bar. Get yourself a drink and enjoy the shows. It really does feel like you’re part of a community still, because even though we can’t see each other, we are still a community, and we’re here for each other.

Buy a basil plant or mint in your next shop. I’ve had mine for two weeks now and it’s really lovely to see something growing and flourishing in a time when things seem a bit glum. Routine, responsibility and good food are really important when you’re stuck indoors and I can’t recommend it enough.