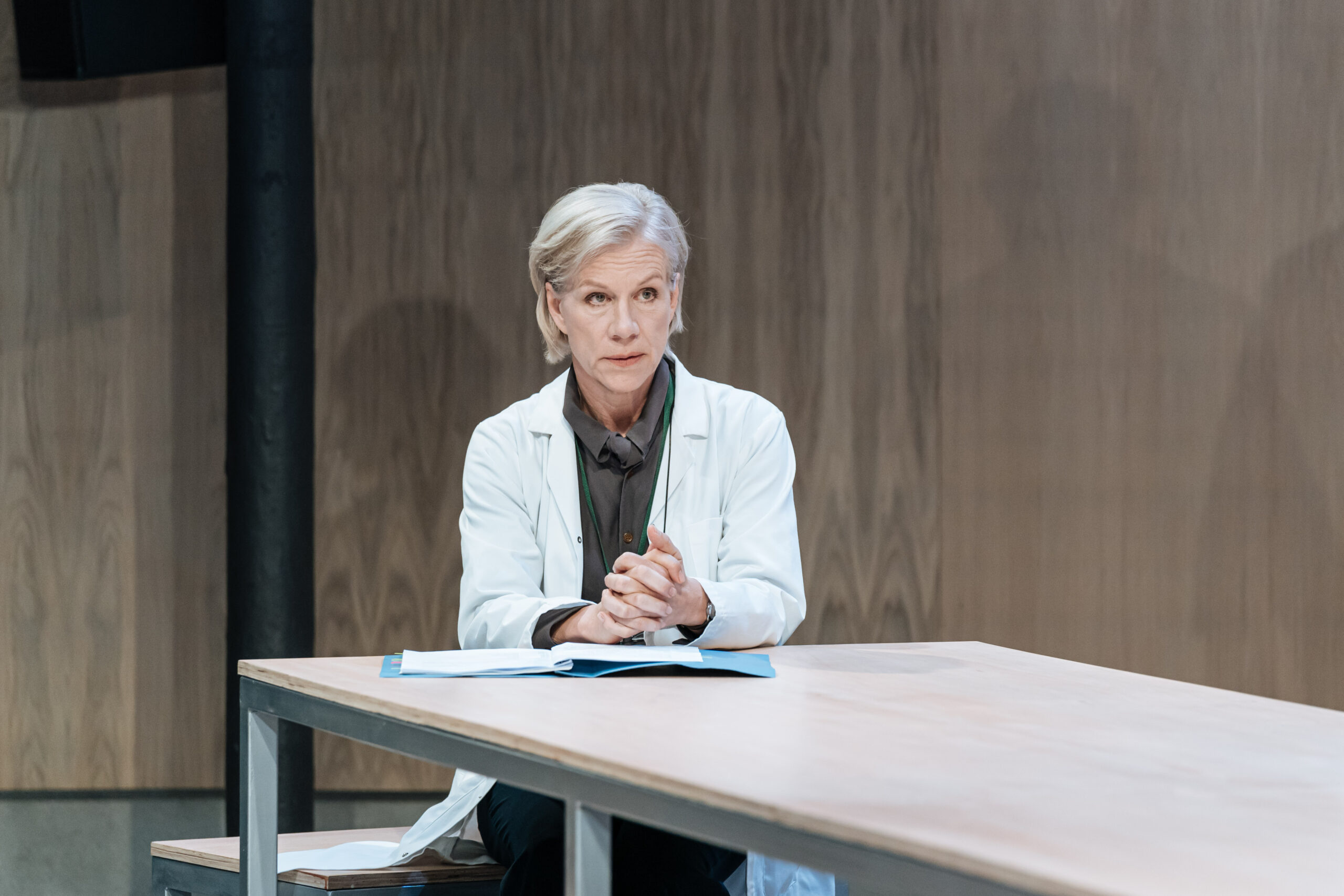 Robert Icke’s The Doctor is very much an ideas-driven play. It’s a profusion of debates about race, gender, identity, morality, religion, medical ethics and wokeness which, against the odds, fit neatly into one production. It’s hard to know where the author stands on pretty much any of the themes he discusses; everything comes so thick and fast I found myself continually playing catch-up trying to figure out where I stood on practically all of the characters and their actions. Although presenting the audience with ambiguity at practically every turn has its virtues, part of me wanted an actual argument to be unambiguously advanced.

Professor Ruth Wolff (Juliet Stevenson) is the doctor in charge of a fourteen-year-old girl dying of sepsis. On instructions from the girl’s parents a Catholic priest (John Mackay) is sent to read her the last rites. Wolff denies him entry on the grounds that the girl herself has not requested this and that were she to be informed she was going to die this information could lead to a fraught death as opposed to a peaceful one. To complicate matters – and to add another few debating topics – the girl dies due to a botched abortion induced by illegal drugs bought on the internet.

Even from the off the board of the hospital is divided. Roger Hardiman (Naomi Wirthner), himself a Catholic, believes Wolff’s actions were a form of religious discrimination. During a heated meeting further insinuations are made about Wolff, her Jewishness, her membership of a controlling ‘elite’ which later prompts Wolff to accuse him of antisemitism. Troubles increase when an online petition against the hospital goes from a few hundred signatures to tens of thousands. In the second act Wolff, in a move that seems particularly foolhardy and against her character, takes part in a live TV debate on her actions which turns out to be a trial as much as a debate. During this she commits an act of betrayal against a teenage girl, the daughter of a friend, which compromises the character’s integrity. Though it’s possible Icke is showing how the pressure of the situation is distorting her essential nature. I’d imagine being the subject of that day’s Twitter storm would have psychologically unpredictable consequences.

Whatever the faults of the writing Stevenson is magnificent. She’s furious, determined and utterly convinced of her position though, by the play’s end, this certainty starts to crumble. Ruth isn’t a particularly likeable character but she feels utterly real and not just a mouthpiece for a series of developing arguments. Wirthner is commanding as the adversary and though the character certainly says some crass things, even here it’s hard to judge whether he’s truly antisemitic or just outraged about Ruth’s behaviour.

When Wolff confronts the priest she uses a mildly insulting word to describe his behaviour which goes unnoticed by the audience. The word’s significance is revealed later when we learn something about the priest which was not apparent to the audience – but was to the play’s characters. Without giving too much away the casting is gender- and race-blind. Not for actor opportunities but to make a point about identity though what the point is I couldn’t fathom.

The Doctor is so dense with argument and counter argument, with audience sympathies liable to shift not just within a scene but within a sentence, it’s hard to fully absorb it all. I should also add that it’s often very funny, though – as you’d expect – the wit is often biting and even bitter. It’s a magnificent theatrical experience which grabs your attention and holds it for its expansive two-and-a-half hours running time.

Continues at the Theatre Royal Brighton until September 10.