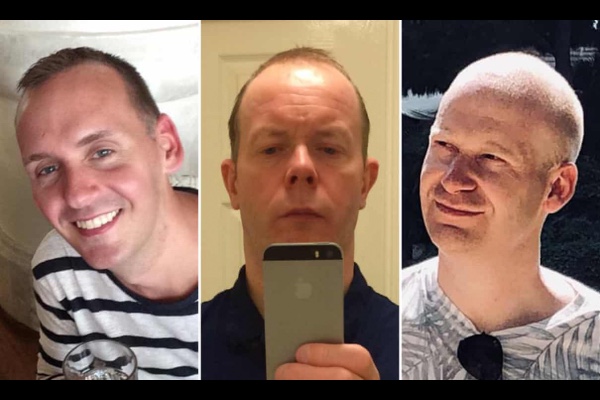 The third victim of the Reading knife attacks has been named locally as David Wails, a scientist and LGBTQ+ community supporter. Michael Main, a friend, described David as person who “always made people smile. We had a lot of banter, it’s sad to know he’s gone so early.”

James Furlong, a local teacher of history and his friend Joe Ritchie-Bennett, who worked for a Dutch pharmaceutical company, have also died. Messages on an online condolence book said that David “was an incredibly accepting man. He was open about his sexuality as a gay man and made it ok for more of us to be as well. He will be dearly missed.” Joe, am American who had lived in the UK for 15 years was a widower whose husband had died previously from cancer. “I`m happy for them that they`re back together “ a friend told the Philadelphia Inquirer.

The Reading Chronicle has online books of condolences opened for each of the men:

A statement from Reading Pride CEO Martin Copper said “It is with deep sadness that I write this. Friends of Reading Pride have been taken too soon due to the actions of an individual. The individuals taken were personal friends of mine. They were supporters of Reading as a community and of Reading Pride. James, Joe, and David were true gentlemen. Each with their own unique personality. They were regulars of the Blagrave, a community pub, whose regulars will be in mourning.They were a support network for individuals, and I know they will be sorely missed by many.We will come together as a community. We will work with local authorities as well as with the families and friends of the victims. We will work to make things better and assist if there is any shortfall in any aspect of this atrocity. Love Unites, and we must rally together as a community. We must be there for each other.”

A minutes silence was held outside the Blagrave Arms. Ahead of the silence a friend of the victims, Jamie Wake, told reporters “The LGBT+ community and our allies, here in Reading, are close family, and we’re stood here outside the Blagrave, a place we call home, and a safe space for so many members of our community. A place that today we have all been drawn to as we unite together, to mourn as one.”

Stonewall said “Our thoughts are with those affected by the attack in Reading on Saturday. It’s heartbreaking to hear two of the victims were LGBT. But we can’t let Islamophobic, racist and xenophobic rhetoric be used to divide us. We must stand together to make progress.”

The brutal, unprovoked stabbings which left three people dead and a further three wounded took place in the town`s Forbury Gardens on Saturday evening. A man was apprehended  on Saturday and initially arrested on suspicion of murder. He was later detained under Section 41 of the Terrorism Act 2000. The Police have stated that they are not looking for anyone else in relation to the incident.

The statement from Reading Pride: