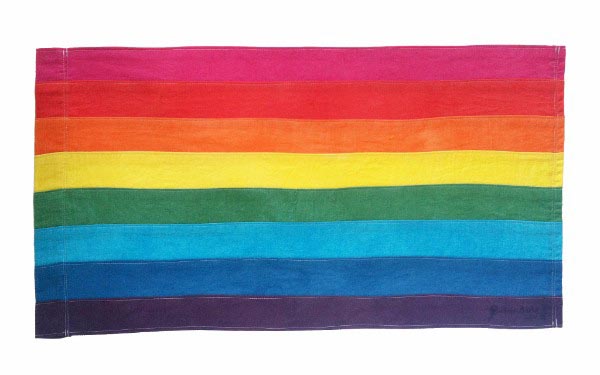 The Design Museum in London acquires a series of new objects for its permanent collection.

The Design Museum has the UK’s only collection devoted exclusively to contemporary design and architecture and is an important record of the key designs that have shaped the modern world. It tells the history of mass production, from the manufacturing innovations of the nineteenth century up to the digital and making revolution of today.

The rainbow flag, originally created by San Francisco artist Gilbert Baker, is the Design Museum’s first acquisition since moving to its new home in Kensington High Street. Identified as one of the defining designs of the modern age, the flag was part of an original series of ten that Baker designed and created in 1978. Also known as the gay pride flag or LGBT+ pride flag, the design reflects the diversity of the LGBT+ (lesbian, gay, bisexual and transgender) communities.

Originating in northern California, the flag has been adopted worldwide and is now a globally recognised symbol.

One of 2016 defining designs, the ★ (Blackstar) album design by Jonathan Barnbrook has also been acquired. Released on January 8 2016 to coincide with Bowie’s 69th birthday, two days before his passing, the album was met with critical acclaim.

The Unicode Blackstar symbol created a simplistic identity that let the music take centre stage. Designed using open source elements, the artwork for the album became open-sourced itself following Bowie’s death enabling fans to engage and interact with the symbols.

Also acquired is the Space Cup, a coffee cup used by astronauts in zero gravity. Designed and developed using scientific results of experiments conducted aboard the International Space Station, the design allows astronauts to drink coffee from an open cup whilst in outer space. The Space Cup was designed to exploit passive capillary forces to replace the role of gravity to create an earth-like drinking experience in space.

The museum’s collection aims to keep up with the latest technological advancements and has acquired the Oculus Rift virtual reality headset, which was released on March 28, 2016. Developed and manufactured by Oculus VR, a division of Facebook Inc., the headsets allow the user to enter an entirely immersive computer-generated environment.

To coincide with the museum’s current exhibition, California: Designing Freedom, the museum has also acquired a number of innovations from California that have created a lasting impact on the world of design. The original Frisbee by Wham-O Frisbee from 1958, the Atari VCS/2600 (the home video game console developed by Atari, Inc. in 1977), and the full run of both the Whole Earth Catalog (an American counterculture magazine and product catalogue published by Stewart Brand between 1968 and 1972) and the Emigre magazines (a quarterly publication devoted to visual communication founded by Rudy VanderLans and Zuzana Licko and published between 1984 and 2005) have all been incorporated into the museum’s expanding collection.

California: Designing Freedom explores how the ideals of the 1960s counterculture morphed into the tech culture of Silicon Valley, and how Designed in California became a global phenomenon. The central premise is that California has pioneered tools of personal liberation, from LSD to surfboards and iPhones. This ambitious survey brings together political posters and portable devices, but also looks beyond hardware to explore how user interface designers in the San Francisco Bay Area are shaping some of our most common daily experiences. By turns empowering, addictive and troubling, Californian products have affected our lives to such an extent that in some ways we are all now Californians.

The Design Museum is the world’s leading museum devoted to architecture and design, its work encompasses all elements of design, including fashion, product and graphic design. Since it opened its doors in 1989 the museum has displayed everything from an AK-47 to high heels designed by Christian Louboutin. It has staged over 100 exhibitions, welcomed over five million visitors and showcased the work of some of the world’s most celebrated designers and architects including Paul Smith, Zaha Hadid, Jonathan Ive, Miuccia Prada, Frank Gehry, Eileen Gray and Dieter Rams.

On November 24, 2016, The Design Museum relocated to Kensington, West London. Leading architectural designer John Pawson has converted the interior of a 1960s modernist building to create a new home giving it three times more space in which to show a wider range of exhibitions and significantly extend its learning programme.

For more information about the Design Museum, click here: