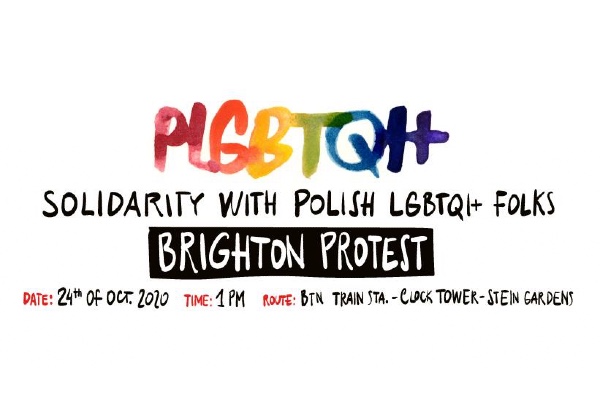 The Protest will meet and march from Brighton Railway Station before stopping for three-minutes silence at the Clock Tower, then heading to Old Steine Gardens where the protest will end with speeches.  See the facebook event page here for full details.

In July, Polish President Andrzej Duda was re- elected with 51.2% of the vote following a campaign in which he demonised and scapegoated LGBTQ+ communities. Although the race was widely viewed as a referendum on the European Union, the President targeted the queer and trans community. Referring to LGBTQ+ rights as an ‘ideology,’ he claimed it is ‘destructive to man’ and worse than communism. Duda also pledged to ban same-sex unions through a constitutional amendment if re-elected.

Since Duda took office in 2015, Poland’s global LGBTQ+ rights standing has consistently eroded. Five years ago, it ranked 33rd in ILGA’s Rainbow Europe ranking, which rates European nations on their friendliness to queer and trans people in law and policy. It has since fallen nine spots to 42nd, the lowest ranking among EU member countries.

Earlier this month, European Commission president Ursula von der Leyen publicly condemned the creation of ‘LGBTQ+ free’ zones in Poland, saying they have no place in the EU.

Organisers of the protest said: “Brighton is a place where LGBTQI+ people can express themselves and therefore we call our community to stand up with the polish LGBTQI+ community and show solidarity. We have to remember that not long-ago in the UK Section 28 meant many stayed imprisoned, in the closet and lived in fear of losing their jobs. Therefore, we cannot allow this to happen to the LGBTQI+ community in Poland. We need to spread the message that we stand with our worldwide LGBTQI+ community.”