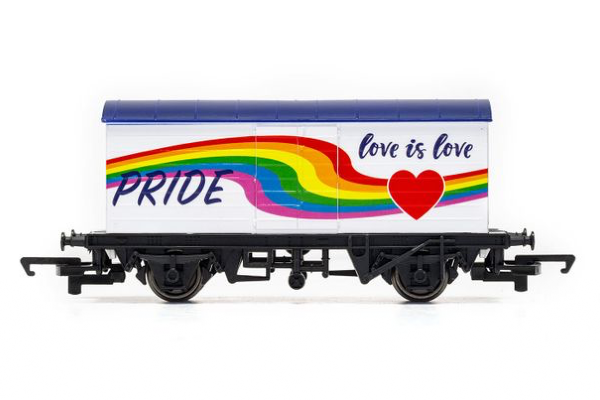 Academics ask: what should we think when every brand seems to support Pride Month?

Another Pride Month passed this summer and again companies were determined to signal their LGBTQ+ credentials through limited-edition versions of their products and endless rainbow avatars on social media feeds. Brands never miss a LGBTQ+ awareness-raising opportunity to show their surface-level love and support, to position themselves as socially progressive and increase their resonance with their younger audience.

From brands’ rainbow Linkedin profile pictures to Google Doodles, every brand and its neighbour is jumping on any available occasion to demonstrate their virtue. Yet people are not so easily fooled and criticism abounds, as rainbow washing is also on the rise. In one of the more high-profile incidents of this Pride Month, famed model railway brand Hornby admitted that it would not be donating any profit from its Pride Van campaign to LGBTQ+ organisations*. Between accusations of rainbow washing, blog posts wondering whether we can escape the commercialisation of Pride, and lists of brands’ ‘Pride fails’, consumers show their disapproval vocally.

Our research, recently published in Psychology and Marketing, uncovers how consumers interpret brands’ LGBTQ+-related support and decide on whether to condemn or to approve them. We show that consumers are more likely to condemn brands as ‘woke-washers’ like Hornby if they are unable to prove morally competent. Specifically, media and consumers make up their minds on the biggest corporates by assessing such performative acts of allyship through three moral criteria: sensitivity, vision, and integration.

• Moral sensitivity – a brand must recognise the moral content of a situation, as failure to do so is likely to damage customer satisfaction, customer-brand relations, and brand equity. For example, by posting straight characters walking over the rainbow flag, Disney has proved morally insensitive to the stigma and discrimination that LGBTQ+ individuals are still experiencing in many instances.

• Moral vision – a brand must show a clear moral vision when outlining challenges to free speech that help solve problems for markets and society, as failure to do so results in brands being dubbed as ‘conformists’ – those who reproduce the dominant moral judgments about what is acceptable to say publicly. While Mattel still shows a lack of moral vision by mostly reproducing mainstream discourses around gender and diversity, it at least shows some moral integration with the launch of gender neutral Barbie dolls in 2019, followed by the launch of the UNO Play with Pride edition this year (alongside $50,000 donated to the It Gets Better Project).

• Moral integration – a brand must have the ability to pursue its moral beliefs in all situations, as failure to do so results in brands being dubbed as ‘opportunists’ and ‘fameseekers’ – manipulating the boundaries of free speech to serve personal interest rather than reform morality. For example, despite sharing the positive experience of its LGBTQ+ staff members, Pfizer demonstrates a lack of moral integration by simultaneously funding anti-gay politicians.

But let’s not despair, some brands have understood the point of Pride Month and, in doing so, further the fight for LGBTQ+ equity and inclusivity. For example, over the last few years, Skittles has celebrated Pride Month with limited-edition Skittles Pride Packs (grey packaging and all grey sweets) to emphasise the rainbow visual as a symbol of the LGBTQ+ community, alongside donations of $1 from each pack to GLAAD in a campaign that exemplifies both moral integration and moral sensitivity.

So, has Pride Month just become another branded holiday? Well, it’s not for us to settle. But what we can tell you is how to judge the genuineness of branded communication: evaluate the brand’s moral sensitivity, vision, and integration. While we can condemn the over-commercialisation of Pride Month, the good news is that these branded discourses, whatever their values and intent, still raise awareness of the LGBTQ+ cause and normalise and legitimise its presence in public discourse.

*Hornby subsequently did a U-turn and released a statement saying: “Following the launch of the Hornby LGBTQ+ Pride Wagon on Tuesday we would like to say sorry. We have got this wrong and deeply apologise – waving the flag is not enough. We must promote the LGBTQ+ community by donating the proceeds to the cause. So we now turn to you and ask where best within the community the proceeds should be donated. Again we apologise to everyone who was offended – this was of course never our intention and for that we are sorry.