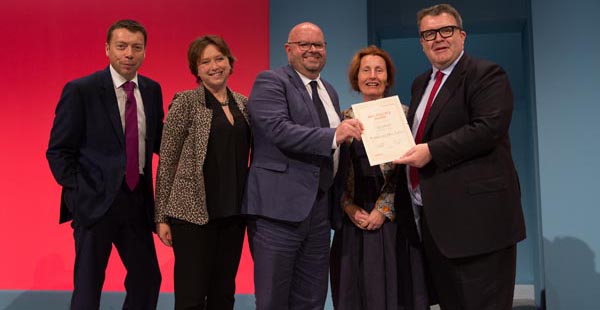 Brighton and Hove Labour Group were announced this weekend as winners of a Best Practice Award, in recognition of their campaigning during the city council elections in May this year.

The award is one of several Best Practice awards, which were presented during the opening session of Labour Party conference on Sunday morning.

Councillor Warren Morgan was joined on the conference platform by Councillors Emma Daniel and Maggie Barradell, and the award was presented by Tom Watson, Deputy Leader of the Labour Party and Iain McNicol, the party’s General Secretary.

Councillor Warren Morgan, Leader of the City Council, said: “I am proud to accept this award on behalf of councillors, candidates, party organisers, members and volunteers who campaigned so hard for Labour in the local elections. We almost doubled the number of Labour councillors, and gave the residents of Brighton and Hove the chance to make a positive vote for a Council that would work for them, as an alternative to the divided and directionless Greens. I am pleased that the Labour Party has recognised our achievement, and also the good work we are already doing to deliver our pledges on jobs, homes, poverty and basic council services.”