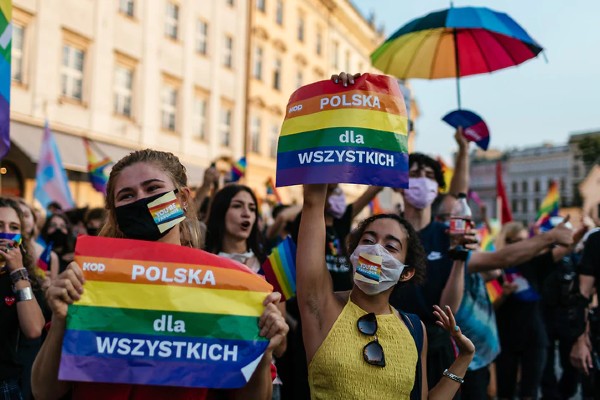 The Balkan Investigative Reporting Network (BIRN) has leaked a letter from Poland’s justice ministry which detailed plans to create an international treaty to ban abortion and same-sex marriage. The Polish government was due to sign a treaty with Croatia, Czechia, Slovakia and Slovenia to create laws against anti-women violence, but announced its plans to withdraw last year.

The Polish parliament is now due to vote on a draft law to request president Andrzej Duda not attend a convention in Istanbul regarding the prevention of violence against women. In place of regulations to protect women, the government has proposed an alternative treaty which aims to limit women’s access to abortion and prevent marriage equality. The new treaty states: “The concept of marriage remains reserved exclusively for the relationship of a woman and a man”, and will protect “the life of a conceived child.”

The treaty also proposes the erasure of trans identities, arguing: “The term ‘sex’ should be understood as a set of biological features, including genetic features, enabling the objective distinction between a woman and a man.” Left-wing Polish MP Marcelina Zawisza said the government is determined to reinforce ‘traditional family values’ at the cost of LGBTQ+ and women’s rights: “They have constantly repeated that the breakdown of the traditional family model is what causes domestic violence and that the rights of LGBTQ+ people are threatening families…I can’t understand this at all: how can the fact that someone loves another person be a threat to me?”