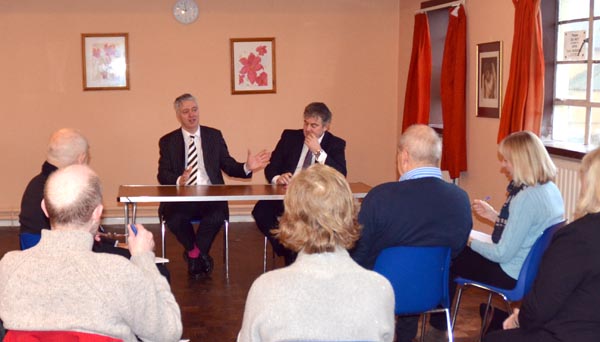 WELCOMING the Minister to the City, Simon Kirby, MP for Brighton Kemptown & Peacehaven, said: “Planning is an important issue in my constituency, particularly at sensitive sites like Meadow Vale, Falmer Avenue and Brighton Marina. It was great to get the Minister down to set out how the government is prioritising building on brownfield sites and the extensive protections in place for valuable green spaces on our urban fringe.”

Planning Minister Brandon Lewis added: “I was delighted to come down to Brighton yesterday, Simon is a very assiduous constituency MP who regularly raises constituency issues with myself and ministerial colleagues. The meeting came on the day I announced the shortlist of areas in the running to receive Government funding to build on brownfield sites.”

“It is baffling that Brighton and Hove City Council did not even bid for any of this funding which would help protect green spaces that I know are so important to local communities.”

Since 2010 the Government has taken a number of steps to ensure brownfield land is prioritised for new housing development – including abolishing top-down regional strategies which had earmarked Green Belt land for new development, and selling enough publicly-owned, surplus brownfield sites for 100,000 homes.

Simon continued: “The Minister also spoke about the importance of local plans and how the Government has devolved real power and control to local people.

“In my view, if the City Council produces a robust plan to meet the housing need that it identified itself by building on brownfield sites, by considering city centre developments where the existing infrastructure is able to support development, then these vital green lungs on the urban fringe can be protected. It is the Council’s decision where housing goes and it is important they make the right decision, and protect our urban fringe. If they do not do so then I will be asking the Government to “call in” the decision.”