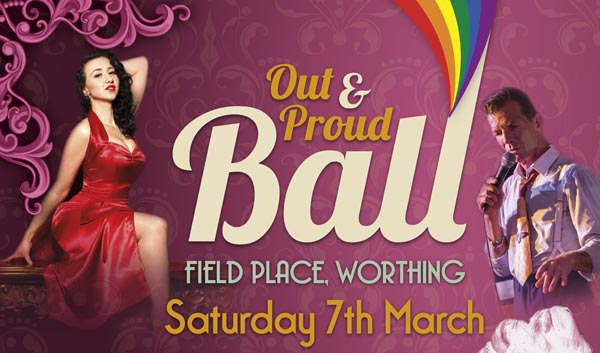 Following last years successful first Out and Proud Ball, organisers have announced the 2015 event will be on Saturday, March 7 at Field Place in Worthing.

FOUR UNIQUE CABARET stars are now confirmed and the stage is set for a fabulous evening, cheekier and more risqué than ever!

Back by popular demand is the multi-talented singer, entertainer and compere, Paul Roberts who will be introducing the acts, performing classic songs, and holding the evening together with his own unique style of panache and unforgettable humour!  Paul is a former vocalist with the Stranglers who he recorded 30 albums and as many singles with and he is considered one of the rising stars of swing and big band music. In the summer of 2009 he received a stack of rave reviews and unanimous critical praise for his leading role in the Toby Cruse production of The Great American Songbook in London.

Paul will be joined by three exotic burlesque acts who will tease, tantalise and entertain you all evening.

The first is Jolie Papillon who was nominated Best Burlesque Act at the London Cabaret Awards, 2014. Jolie one of  Europe’s most highly skilled burlesque stars is an exquisite dancer, choreographer and model. She trained in dance and singing at one of Italy’s top theatre academy’s before making her mark on the glamorous world of burlesque. Jolie is a headlining star of London’s best cabaret clubs and beyond, including Proud Cabaret, Wam Bam, Cafe de Paris, Cellar Door, the Hippodrome Casino and the Bloomsbury Ballroom. She has been featured on Made in Chelsea on Channel 4 and presented the cast their BAFTA award in 2013.

Jolie and Paul will be joined by the fabulously patriotic Elsie Diamond. Elsie is an international burlesque performer, cabaret singer and compere, inspired by the music hall tradition of comic song, opera and pop culture. With the songs of WW2 and a background in costume design, Miss Diamond has an eclectic repertoire of sultry musical based routines.

Finally, Jolie, Elsie and Paul will be joined by ‘bear-lesque’ performer Dave the Bear! London’s biggest (literally!) and best male burlesque performer, singer, compere and sexy beast! Dave is no stranger to the burlesque scene and is a regular, performing in Central London at Proud Cabaret, Madame JoJos, Cafe de Paris and London Wonderground. He recently stole the show on 8 out Of Ten Cats Does Countdown. Dave likes to perform interactively, tantalising and teasing, playful and cheeky! And that’s Dave’s own shows summed up as a male ‘bear-lesque’ performer.

Doors open at 7pm when you will be offered a drink on arrival, followed at 7.30pm by a sumptuous three-course dinner, interspersed between the entertainments, followed by your chance to strut your stuff on the dance floor till late!

Tickets: £45 and must be booked in advance