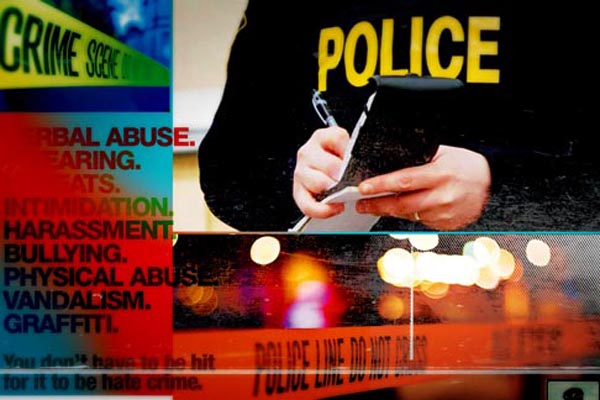 In the August edition of Gscene, I shared at length an experience, a hate-crime of sorts and the debacle that followed at the hands of the criminal justice system.

I have no intention of recounting here, either the incident itself or the ensuing overall affair, it is a chapter I am closing.

However, I did, at the end of said article, pose some questions that in this ‘hate-crime’-themed edition, I would like to return to and hopefully offer some answers.

I’m uncomfortable with the term ‘hate-crime’ when reflecting upon my own experience. Having an association with an incident labelled as such holds such negative connotations for me and I’m equally uncomfortable accepting the role of victim within such circumstances, even if technically, and legally during the criminal justice process, that is exactly what I am. And yet actually being the victim does not mean that I need to accept the role and sit idly by as a passenger.

Following my entire experience of the past 15 months, I’ve learned that I’m much more in control of how I respond to such an affair than I ever considered during it.

I closed the article with a reflection on the idea of ‘duty’. The ‘duty’ to report incidents of hate and prejudice and how following my experience I would now question this duty and understand those who decide not to speak up.

About turn. There is an absolute duty to stand up and speak about the experience. To report it, and to press for a thorough investigation and consequences for those involved, even if the final legal result is not as I would wish. That said, my duty is not to the law, to the idea of right or wrong. My duty is not about faith in the criminal justice process and system or otherwise. My duty is to my community and to my wider LGBT+ family. And a duty I have for too long neglected.

Following the publication of the article both in print and online, the piece was widely shared on social media. I’ve been writing for this magazine for over 13 years and have contributed somewhere in the region of 200 articles during that time. The response to this narrative has been off the scale.

Friends of friends approaching me at Pride to let me know they had read the piece, asking if they could share with me their own experience. And it was both my duty and absolute responsibility to listen to them. Stories that some had held secret for more than a decade. LGBT individuals whose common thread was that, during their own experience of hate-crime, they felt they were alone. They’re not, I’m not, you’re not, we’re not.

We protest for those who cannot. We speak up for those who don’t yet know they have a voice. We listen to those who feel they are never heard. This is our duty.

I posed three questions in my original article, I will answer them here.
Faced with the same set of circumstances, would I put my trust in authority and the right way of doing things? Yes and no. I would absolutely use the legal and appropriate channels in response to my own circumstances as I want to be the participant that is beyond reproach.

For my role in this to have been an innocent bystander unfairly attacked for who I am. But next time, I would be a nuisance throughout. Weekly phone calls demanding updates, letters to my local council, MP, LGBT liaison officer whosoever is an appropriate contact who might help move things along. I will participate in the process, but not allow the process to ask me to wait.

Politely but directly ask questions however challenging, and refuse to take “we’re dealing with it” as an acceptable dismissal. I didn’t ask to be on this journey but now I am, I’m taking the car keys.

Would I help someone in trouble at the potential risk to myself or say ‘nah mate I’m not getting involved’? Sharing my experience has reminded me how crucial we are to one another. Although it was helping another that put me in the firing line and led to the events I became embroiled in, I would do it again. To cross the street to avoid another in need or to turn our back on a stranger is a victory for the oppressor. Of course I will help.

Would I sit quietly by with polite decorum in the face of a sustained, horrible and public tirade of abuse? Not necessarily. That is not to say that I would use the insulting and abusive language of my (verbal) attacker, but I would call out the incident for what it was there and then and refuse to allow anyone in authority to talk me out of it whatever the reason.

This is a crime against me based upon the man that I am, it’s an assault, it’s against the law, and I expect the perpetrators to be dealt with in accordance with the law.

Sharing my story was not an entirely selfless act. I was assured that writing about it and using the opportunity I’m given through this magazine would help me move on and put it to rest.

Writing this piece today would suggest that perhaps I haven’t achieved this. I have. The book on my experience is now closed, but it wasn’t just the writing that helped. It was watching people listen, respond, offer me courage, love, kindness and remind me that it is not I who is the moron.
As I write, hurricane Irma batters Florida, having destroyed great swathes of the Caribbean in its path. And morons take to the airwaves, internet and social media platforms to proclaim God’s justifiable wrath in the face of LGBT+ equality as a reasonable explanation.

This is the language of idiots, but idiots have an audience. Call it out. Share the opposite and more reasoned explanation, science and the environment. Blaming you, me, us who come in peace to live our lives as only we know how, is an outrage and a crime. Do not tolerate it, stand up. It’s time to put an end to this nonsense. This is our duty.