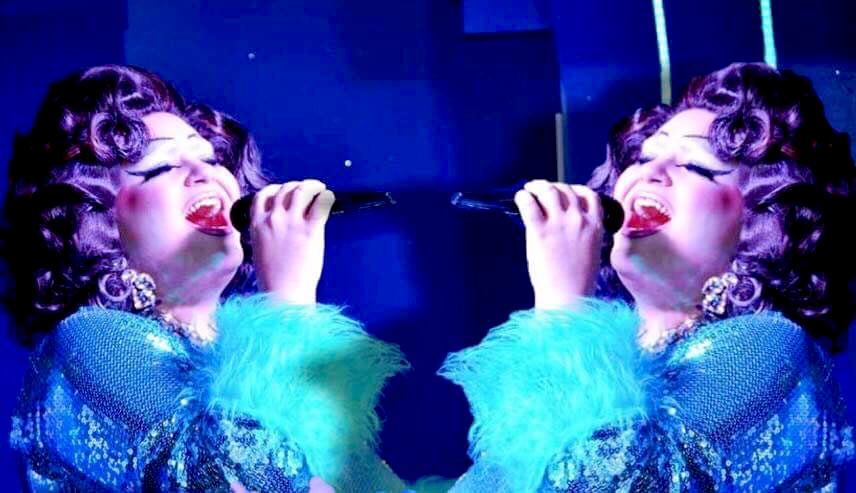 Tom Redgrave aka Pat Clutcher is one of a new generation of drag performers working the Brighton circuit. He talks to Brian Butler about his Sunderland roots, not being a hit with pop star David Essex’s fans, and his hopes for his future act.

TOM Redgrave began very early to perform in his native Sunderland, doing musicals like Annie, Bugsy Malone and West Side Story at the tender age of 9.

“When I was 10 I bought the Stage newspaper and dreamed of going to somewhere like the Sylvia Young theatre school, but for a little Sunderland boy it wasn’t going to happen,” he says.

His secondary education was also packed with musicals and youth theatre shows, including at the magnificent Sunderland Empire. “School work took a backseat and I wanted to do a B Tech in performing arts but my parents insisted  I wait till I was 18.”

So it was that Tom found himself at the Guildford School of Acting. “Their reputation was in training actor/singers who could move. I was never much of a dancer. I aspired to be the next Michael Ball rather than a Wayne Sleep. I always looked older than I actually was so I always played dads or granddads, and older principal roles – like in the show The Fix.”

His roles included the narrator in Under Milk Wood and parts in 110 in the Shade and West Side Story again.

He admits to a string of what he calls “tatty tours and tatty pantos” before landing a role in the David Essex vehicle musical All The Fun Of The Fair, where he sometimes went on as Essex’s understudy, much to the annoyance of the many Essex fans in the audience. “They refused to applaud at my curtain call.”

That and 2 years of touring led him to lose interest in his stage career and led him into pub and hotel management, including the well-known Marsden Inn in South Shields, where the establishment clings precariously to the cliff side above a beach.

His first experience of drag was as Meg Mortimer named after the Noelle Gordon character in the soap opera Crossroads, but after 3 gigs in a few months he decided not to pursue it.

Moving to Brighton he worked at the Old Ship hotel and then changed careers yet again deciding to train as a nurse. “I did it for 9 months but couldn’t get into it,” he admits. So he went back to the food and beverage business at the Staley Hall Hotel in Northumberland, which he describes as “the middle of nowhere”.

“The staff were very unhappy, but I believe everything happens for a reason and Alastair, the owner of the Camelford Arms in Brighton offered me the job of assistant manager.” He had previously worked behind the bar there and coincidentally had previously signed his major stage contract with his agent in the pub .

Being on the mic for quiz nights and raffles helped him develop his patter with customers and the ability to pick tunes for punters. At the nearby Marine Tavern’s open mic nights he met the young drag performer Stephanie Von Clitz (Steven Banks). “We became good friends and he suggested I give drag a shot. So I took it very seriously, bought a wig and a frock off the internet and walked onto the stage as Angel de la North.”

When the 15 heats of the competition Drag Idol were announced Stephanie suggested Tom should enter at the White Swan in London. “I was awful; it was a baptism of fire but I enjoyed it. I realised I needed to do better and so in May 2018 he entered the heat at Brighton’s Charles Street Tap. “I remember someone saying I was someone they ought to hire.”

In London he took part in Drag Idol’s semi-final, didn’t win but was given a wild card to perform again the following week, where he admits “my Drag Idol story ended”. But work at the Queen’s Arms followed and a friend suggested he adopt a new persona in the style of comedian Les Dawson’s drag character Ada. And so Pat Clutcher was born as a tribute to the character Pat Butcher in Eastenders.

“The character is me in a frock saying things I wouldn’t dare say in real life – a court jester who can get away with stuff. It’s very different when I’m Tom doing karaoke. If you send yourself up, the audience know not to take you too seriously. I’ve rediscovered my mojo and my confidence and I’m not afraid to do stuff any more.”

Asked to advise his 16 year-old self he says “I’d tell me it’s all going to be all right.”

Tom admits the biggest influence on his act is Miss Jason (Jason Sutton). “I’d love to be thought of as the next Miss Jason.” He admits his style of performing harks back to the older days of drag with its camp humour and forthrightness. “I’m attracted by the character of strong independent women – like Pat Butcher, Meg Mortimer and Ena Sharples. I use snippets of their characteristics in my act.”

With regular spots at the Affinity Bar, Queen’s Arms , Legends and Charles Street Tap, he’s particularly proud to have been nominated for best drag act in the 2019 Golden Handbags, after just a year in the business.

He’s certainly a talent to watch out for.