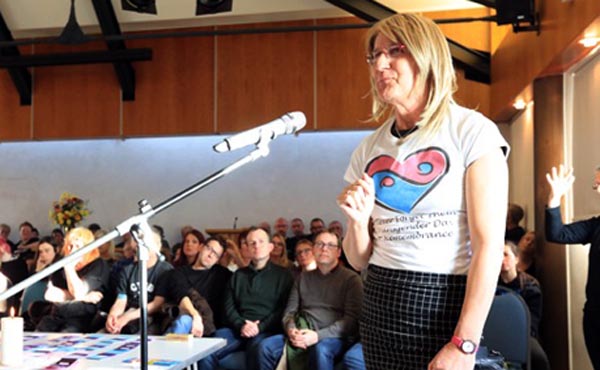 Katie Yeomans talks to James Ledward about her rapid and positive journey transitioning.

Last November, Katie Yeomans travelled to Brighton from Portsmouth to speak at the Brighton Transgender Day of Remembrance event at Dorset Garden Methodist Church and tell people about her positive story transitioning.

Katie a former court clerk, is 63 and began her transition just 2 years ago. Her life changed in late 2014 when for the first time she dressed as a woman to go to a fancy dress party, nothing sexual, just for fun. Later that year, on New Years Eve she went to a party at an LGBT pub; her first time out ever in ‘public’.

“To be honest”, she said: “I was terrified about what people might say, but I had no unwanted attention on the streets on the way to the pub and only nice comments at the party. Something every girl likes to hear.”

She legally changed her name in 2014, and began Hormone Treatment in July 2015.

As there was no support groups in Portsmouth, she joined an LGBT support group in Bournemouth where she had the opportunity to receive 1 2 1 counselling if ever she needed it and to attend regular meetings with other people who were transitioning.

“I found this quite useful and would recommend it to anyone as it helped me realise I was not alone”, she said.

“I guess I have been lucky as I have had no ill effects, I am extremely pleased with the results of the hormone treatment and I have just got funding from the GIC for laser treatment, so soon I won’t have to shave anymore.”

Katie found everyone at the Gender Clinic to be “fantastic and supportive” and is due to undergo surgery in late 2016.

She continued: “At first I only used to go to LGBT friendly places where I knew I would be accepted and feel comfortable. Nowadays however, I go anywhere. I find people polite, very accepting and I have made lots of new friends. But, I am extremely confident so guess that makes it easier for me?

“Just remember, walk tall, be polite and proud your Transgender!”

However, Katie did get assaulted in a pub when a guy threw beer over her. She called the police, he was arrested and served with a Community Resolution Order ordering him to write a letter of apology to Katie and pay the cost of dry cleaning her clothes.

She has had the odd unpleasant comment in the street, but refuses to tolerate such behaviour and always deals with it as it arises, normally saying something witty back in response.

Most importantly, she encourages anyone to report Hate Crime saying “its just NOT acceptable”.

Katie said: “My family, friends and neighbours have been very supportive and accepting of my being Transgender. I now get greeting cards with sister on from my family, I am well liked and accepted in my local community.”

“I understand some people have bad experiences being Trans but in general I have been lucky and have had a wonderful experience these past two years. Things seem to just get better as time goes on. There are some lovely and understanding people out there and always remember, do what your heart tells you. Hiding away will only make you miserable in life.

“I hope telling my story will encourage others to do the same?”