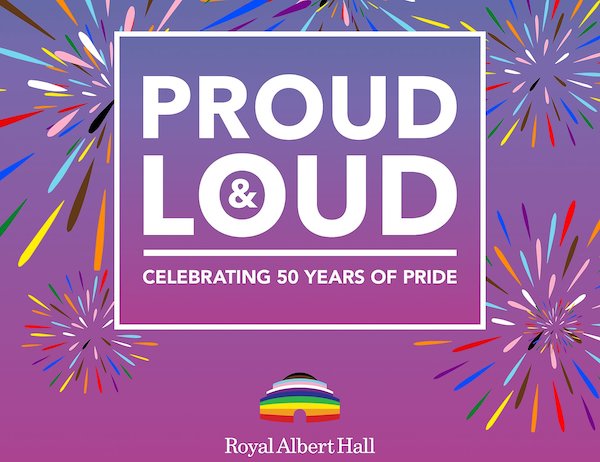 Pride In London has announced Proud and Loud: Celebrating 50 Years Of Pride, a concert at the Royal Albert Hall on Saturday, June 4. Proud and Loud will raise the roof with spectacular music performances and LGBTQ+ icons celebrating the past 50 years of Pride in the UK, with a look at what the future holds for the LGBTQ+ community and raising money for Pride in London’s Unity Fund.

The first acts to be announced are UK singer-songwriter Calum Scott, who rose to fame with his incredible cover of Robyn’s Dancing On My Own in 2015 and has gone from strength to strength ever since. Joining Calum is trailblazing LA-based pop star, LGBTQ+ icon and advocate Hayley Kiyoko.

Celebrating and commemorating 50 years since the first Pride march in the UK, which took place on July 1, 1972, this special celebratory evening will feature iconic trailblazers from across the LGBTQ+ community and memorable performances from the most recognisable names in music and entertainment. The night will look back at some of the key advancements of LGBTQ+ human rights in the UK and highlight those hopes and dreams for the next 50 years including the ban of conversion therapy and the continued fight for trans rights and those rights of LGBTQ+ people around the world who continue to face persecution for who they are and who they love.

Funds raised from the event will go towards Pride in London’s Unity Fund, which helps build stronger communities by providing one-off grants to grassroots organisations that address the needs of the UK’s LGBTQ+ communities. The Unity Fund has already raised over £100,000 and LGBTQ+ organisations to have benefited so far from grants include: Out & Proud African LGBTI, FTM London / TransM London, Black Trans Alliance, London Gay Symphony Orchestra, House of Rainbow CIC and many more.

Christopher Joell-Deshields, Pride in London’s Executive Director, said: “The LGBTQ+ community in the UK has come so far in the past 50 years, and this concert will be a great moment to celebrate our journey and where we are today.

“However, it is also a time to acknowledge the work still to be done and what the next 50 years will look like. We are so grateful to all of the artists, LGBTQ+ icons and allies who will help make a night to remember.”

Pride in London, which this year takes place on Saturday, July 2, provides a platform for LGBTQ+ communities to raise awareness of the importance of visibility, unity and equality and encourage people to campaign and stand for each other within the community.

For more info on Pride in London, CLICK HERE