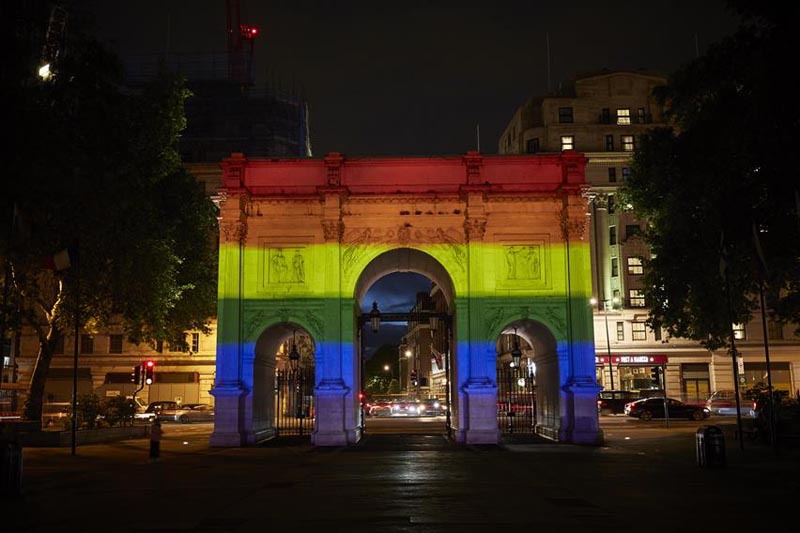 For the first time Marble Arch illuminated in rainbow flag colours to celebrate Pride in London 2019.

FOR the first time ever, Marble Arch – one of London’s most recognisable landmarks – was illuminated with the colours of the rainbow flag in celebration of Pride in London 2019, which took place on Saturday, July 6.

Organised by Marble Arch London BID, in collaboration with English Heritage – who care for the National monument – and Westminster City Council, the historic Marble Arch monument was transformed for one night only to create a highly visible emblem on the capital’s skyline in celebration of an inclusive, diverse and open London.

Completed in 1833, John Nash’s famous Grade I listed triumphal arch has hosted royal processions as well as political movements and marches, including its role as a principal  place of congregation for the women’s suffrage movement over one hundred years ago.

Kay Buxton, Chief Executive, Marble Arch London BID, said: “Marble Arch has had a long history as a symbol of rightful causes, and it’s only fitting that the monument should now play its part in embracing this important event, the success of which shows how much has been achieved over the years for LGBT+ rights in the UK.

“Of course, unfortunately the LGBT+ community can still face levels of discrimination and intolerance, and this is why it is so important that organisations and institutions continue to support Pride in highly visible ways.  We are therefore extremely proud to have had the opportunity to transform this much loved London landmark in such a dramatic way, working closely with our partners Westminster City Council and the custodians of Marble Arch, English Heritage, to make this possible.”

Cllr Ian Adams, LGBT+ Lead Member, Westminster City Council said: “Lighting up Marble Arch in rainbow colours is a fun and eye-catching way of celebrating the diversity of Westminster’s community as we count down to the biggest LGBT+ parade in the UK. Over 500 groups will be parading through our streets at this year’s Pride in London and transforming Marble Arch is just one of the ways we will be supporting this large-scale and important celebration of the LGBT+ community.”

Alison Naylor, Free Sites Partnership Manager, English Heritage, added: “The symbol of Marble Arch is interwoven with the history of London, iconic enough that it even has a tube station named after it, and English Heritage are pleased that the landmark will act as a vivid and visible celebration for Pride month.

As a charity, we are keen to tell the diverse stories of England, having recently hosted our first Pride event at a historic property, and our staff celebrated on July 6 with the Museum Pride London Network.”

Marble Arch joins a roll call of famous London landmarks, including the Palace of Westminster, the MI6 building and the London Eye, which have all been previously transformed into the rainbow colours for previous Pride in London celebrations.