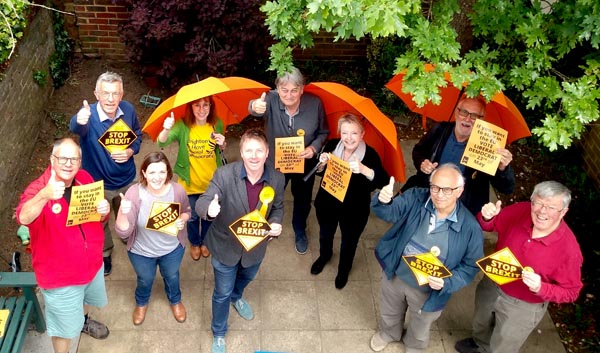 Local election agent Paul Chandler said: “Many thanks to all in the City who voted LibDem.

We realise that for some people this is the first time they have voted LibDem. Please, don’t make it the last!’

Having run an unambiguous campaign to stop Brexit the party made huge gains across the country, which follows their best ever gains in English local election results at the start of May.

Liberal Democrat leader Vince Cable said:  “Our clear, honest, unambiguous message has won us our best ever European election result, and pushed Corbyn’s Labour into third place. “We have shown ourselves to be the strongest Remain force in British politics.

“We will always stand up for the people who have put their faith in us, taking this mandate forward to campaign harder than ever to stop Brexit.

“There is a clear lesson for Labour in tonight’s results: get off the fence. In trying to please everybody they have pleased nobody.

“With a Tory leadership contest increasing the risk of a “No Deal” Brexit, Britain can no longer tolerate an Opposition which ducks and dives on the biggest issue of the day.

“If you want to see an outward looking Britain, standing tall in the world with our European partners, and offering opportunity to everyone at home, there is no better moment to shape the future of our party and our politics, by joining the Liberal Democrats.”

This result is the first time Liberal Democrats have beaten both the Conservative and Labour Parties in a UK-wide election. The Liberal Party last achieved this 101 years ago.

LibDems have tripled their 2014 share of the vote, securing their highest vote share since 2010 and returning their largest ever group of MEPs to the European Parliament ever.

For the first time the Lib Dems topped the poll in London, which they hope will send a clear message ahead of next year’s mayoral elections that they will be  serious players.

This is the worst ever result for the Conservatives in a UK-wide election returning just 4 MEPs. In their previous worst performance in the European Elections they returned 26 MEPs.

Similarly Labour’s failure to be clear about their Brexit policy resulted in their worst ever performance in a UK-wide election returning just 10 MEPs. They have never returned fewer than 13 MEPs before.

The Greens made significant advances across the country topping the poll in Brighton and Hove with 35.7% of the vote and returning natioinally, 7 MEPs.
The nights big winner was Nigel Farage’s Brexit Party. Despite only being formed in the last couple of weeks they returned 29 MEPs on 31.6% of the vote.
The nights big losers were UKIP who lost all 24 of their MEPs taking just 3.3% of the vote.