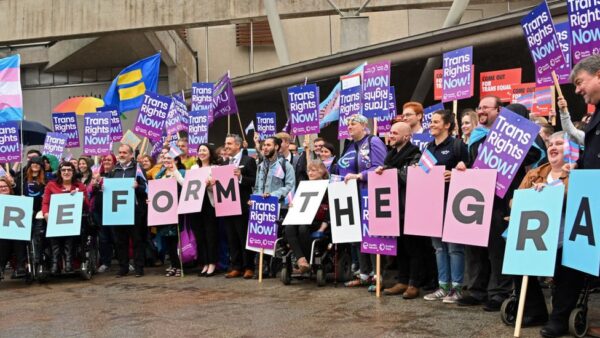 More than 60 LGBTQ+ organisations from around Scotland have today (Monday, December 19) written to MSPs in support of the Gender Recognition Reform Bill. One-thousand five hundred postcards calling for reform will be delivered to Parliament tomorrow (Tuesday, December 20) and, as of this morning, 33,255 emails in support of reform have been sent to MSPs at Scottish Parliament.

Supporters of the Bill will also be gathering outside the Scottish Parliament at 10am on Tuesday, December 20 ahead of the first of two days of debate before the final vote on Wednesday, December 21 in order to send a colourful, positive message from trans people, friends, families, communities and allies in support of reforming the Gender Recognition Act.

The letter to MSPs is signed by a wide variety of LGBTQ+ groups from Dumfries to Shetland. It says:

“This week, the Scottish Parliament has a historic opportunity to continue Scotland’s journey towards full social and legal equality, for all LGBT+ people, by passing a new law which will remove bureaucratic and dehumanising barriers to legal gender recognition for trans men and women.

“As an LGBT+ community we have seen the repeal of Section 28, protection from discrimination, and equal marriage as some of the key steps forward in a country that respects all who live here, no matter who they love or who they are. In this journey we have learned that we are stronger when we are united.”

The signatories call on MSPs to reject amendments that would undermine the core principles of the bill:

· That the minimum age should be 16, with support and advice signposted and available for 16 and 17 year olds

Dr Rebecca Crowther, Policy Coordinator at the Equality Network, said: “This letter reaffirms what many of us already knew, that the vast majority of LGBT+ people support reforming the Gender Recognition Act and this bill proposed by the Scottish Government. LGBT+ people have seen huge steps forward to their rights in two decades, and we urge MSPs to continue to make progress forward by backing the Bill.”

Heidi Vistisen, Policy Manager for LEAP Sports Scotland, said: “This legislation will not only reduce the barriers for trans people to get legal gender recognition, it will also further enable them to live their full authentic lives. We are pleased to see so many organisations and sports groups show their unwavering support for the inclusion of trans people, and hope members of the Scottish Parliament will listen to the many voices asking them to also show their support.”

Sand Owsnett, chair of Highland Pride, said: “Highland Pride will always support and advocate for trans equality because everyone has the right to be themselves. The current gender recognition process is outdated, dehumanising and excludes many trans people. The proposed reforms would not only bring Scotland closer to international best practice, but also uphold trans people’s human rights.”

Kath Pierce, founder and co-editor of Somewhere for Us magazine, said: “Our organisation exists to champion the lives of our diverse LGBTQ+ communities across Scotland. This bill champions our trans family and supports them to live their authentic lives, just as so many of us already have the freedom to.”